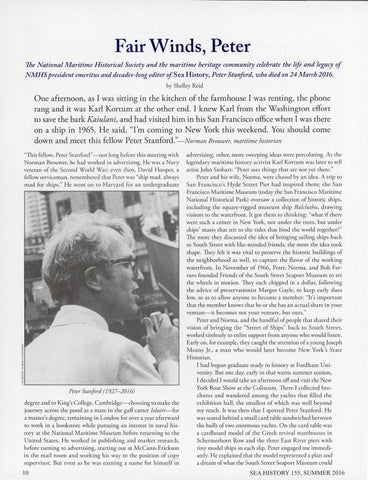 One afternoon, as I was sitting in the kitchen of the farmhouse I was renting, the phone rang and it was Karl Kortum at the other end. I knew Karl from the Washington effort to save the bark Kaiulani, and had visited him in his San Francisco office when I was there on a ship in 1965. He said, &#39;Tm coming to New York this weekend. You should come down and meet this fellow Peter Stanford.&quot;-Norman Brouwer, maritime historian &quot;This fellow, Peter Stanford&quot;-not long before this meeringwith Norman Brouwer, he had worked in advertising. He was a Navy veteran of the Second World War; even then, David Hooper, a fellow serviceman, remembered that Peter was &quot;ship mad, always mad for ships.&quot; He went on ro H arva rd for an undergraduate

Peter Stanford (1927-2016) degree and ro King&#39;s College, Cambridge-choosing ro make the journey across the pond as a mate in the gaff cutter Iolaire-for a master&#39;s degree, remaining in London for over a year afterward ro work in a bookstore while pursuing an interest in naval history at the National Maritime Museum before returning to the United States. He worked in publishing and market research, before turning to advertising, starting out at McCann-Erickson in the mail room and working his way to the position of copy supervisor. But even as he was earning a name for himself in 10

advertising, other, more sweeping ideas were percolating. As the legendary maritime history activist Karl Kortum was later to tell artist John Stobart: &quot;Peter sees things that are not yet there.&quot; Peter and his wife, Norma, were chased by an idea. A trip to San Francisco&#39;s Hyde Street Pier h ad inspired them; the San Francisco Maritime Museum (today the San Francisco Maritime National Historical Park) oversaw a collection of historic ships, including the square-rigged museum ship Balclutha, drawing visitors to the waterfront. It got them to thinking: &quot;what if there were such a center in New York, not under the trees, but under ships&#39; masts that stir to the tides that bind the world together?&quot; The more they discussed the idea of bringing sailing ships back to South Street with like-minded friends , the more the idea took shape. They felt it was vital to preserve the historic buildings of the neighborhood as well, to capture the flavor of the working waterfront. In November of 1966, Peter, Norma, and Bob Ferraro founded Friends of the South Street Seaport Museum to set the wheels in motion. They each chipped in a dollar, following the advice of preservationist Margot Gayle, to keep early dues low, so as to allow anyone to become a member: &quot;Ir&#39;s important that the member knows that he or she has an actual share in your venture-it becomes not your venture, but ours.&quot; Peter and Norma, and the handful of people that shared their vision of bringing the &quot;S treet of Ships&quot; back to South Street, worked tirelessly to enlist support from anyone who would listen. Early on, for example, they caught the attention of a young Joseph Meany Jr., a man who would later become New York&#39;s State Historian. I had begun graduate study in history at Fordham University. But one day, early in that warm summer session, I decided I would take an afternoon off and visit the New York Boat Show at the Coliseum. There I collected brochures and wandered among the yachts that filled the exhibition hall, the smallest of which was well beyond my reach. Ir was then that I spotted Peter Stanford. H e was seated behind a small card table sandwiched between the hulls of two enormous yachts. On the card table was a cardboard model of the Greek revival warehouses in Schermerhorn Row and the three East River piers with tiny model ships in each slip. Peter engaged me immediately. He explained that the model represented a plan and a dream of what the South Street Seaport Museum could SEA HISTORY 155, SUMMER2016