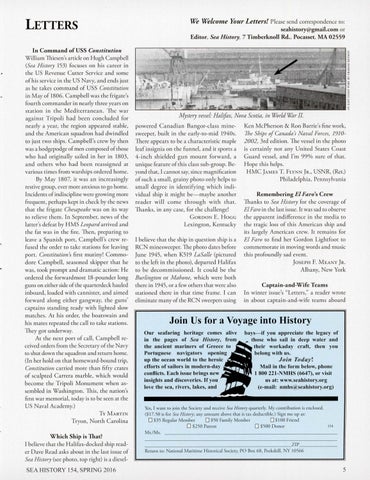 In Command of USS Constitution W illiam Thiesen&#39;s article on Hugh Campbell (Sea H istory 153) fo cuses on his career in the US Revenue C utter Service and some of h is service in the US Navy, and ends just as he takes command of U SS Constitution in May of 1806 . Campbel l was the fri gate&#39;s fourth commander in nearly three yea rs on sta tion in the M editerra nean . 1he wa r against T ripoli h ad been concluded fo r nearly a year, the region appea red stable, and the A merican squadron had dwi ndled to just two ships. Campbell &#39;s crew by then was a hodgepodge of men composed of those who had originally sailed in her in 1803, and o thers w ho h ad been reassigned at various times from warships ordered home. By M ay 1807, it was an increasingly restive group, ever more anxious to go home. Incidents of indiscipline were growing more frequent, perhaps kept in check by the news that the fri gate Chesapeake was on its way to relieve them . In September, news of the latter&#39;s defeat by HMS Leopard arrived and the fa t was in the fire. Then, prepa rin g to leave a Spanish port, Campbell &#39;s crew refu sed the order to take stations for leaving port. Constitution&#39;s first mutiny! C ommodore Campbell, seasoned skipper th at he was, took prompt and d ra m atic action: He ordered the forwardmost 18-po under long guns on either side of the quarterdeck hauled inboa rd, loaded with cannister, and aimed fo rward along either gangway, the guns&#39; captains standing ready with lighted slow m atches. At his order, the boatswain and his m ates repeated the call to take stations . They got underway. At the next port of call, C ampbell received orders from the Secretary of the Navy to shut down the squadro n and return home. (In her hold on that homeward-bound trip, Constitution carried more than fifty crates of sculpted C arrera ma rble, which would become the Tripoli Monument when assembled in Washing ton . This, the nation&#39;s first war memorial, today is to be seen at the US Naval Academy.) TY M ARTIN

Tryon, North C arolina Which Ship is That? I believe that the H alifax- docked ship reader Dave Read asks about in the las t issue of Sea H istory (see photo, top ri ght) is a diesel-

Mystery vessel: Halifax, Nova Scotia, in Wo rld ~r II. powered Can adia n Ba ngor-class minesweeper, built in the early-to-mid 1940s. There appears to be a characteristic m aple leaf insignia on the fu nnel, and it sports a 4-inch shielded gun m o unt for wa rd, a unique feature of this class sub-group. Beyond that, I cannot say, since magnification of such a sm all, grainy photo only helps to sm all degree in identifyi ng which individual ship it might be-m aybe another reader w ill com e through w ith tha t. Th anks, in any case, for the challenge! G O R DON E. H OGG Lexing ton, Kentucky I believe th at the ship in question ship is a RCN minesweeper. The photo dates before June 1945 , when K519 LaSalle (pictured to the left in the photo), departed H ali fax to be decommissioned . It could be the Burlington or Mahone, which were both there in 1945, or a few others that were also statio ned there in that time frame. I can eliminate many of the RCN sweepers using

Ken M cPherson &amp; Ron Ba rri e&#39;s fin e work, The Ships of Canada&#39;s Naval Forces, 19 102 002, 3 rd edition . The vessel in the photo is certainly not any U nited States Coast G uard vessel, and I&#39;m 99% sure of that. H ope th is helps. H MC ] AMES T. FLYNN ] R ., USNR, (Ret.) Philadelphia, Pennsylva nia Remembering El Faro&#39;s Crew Thanks to Sea H istory fo r the coverage of El Faro in the last issue. It was sad to observe the apparent indifference in the m edia to the tragic loss of this A merican ship and its la rgely A merican crew. It rem ains for El Faro to find her Go rdo n Lightfoo t to commemorate in moving words and music this profoundly sad event. ] OSE PH

Join Us for a Voyage into History Our seafa ring heritage comes alive in the pages of Sea Histo1y, from the ancient mariners of Greece to Portuguese navigators opening up the ocean world to the heroic efforts of sailors in modern-day conflicts. Each issue brings new insights and discoveries. If yo u love the sea, rivers, lakes, and

bays-if you appreciate the legacy of those who sail in deep water and their workaday craft, then yo u belong with us.