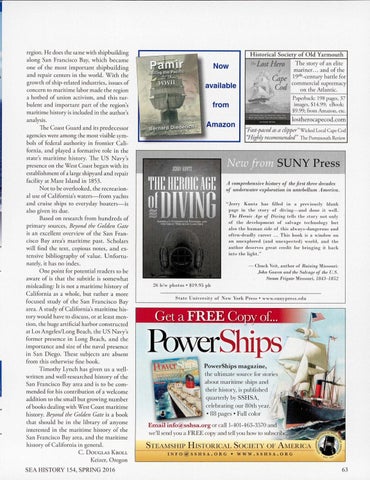 region. He does the same with shipbuilding along San Francisco Bay, which became one of the most important shipbuilding and repair centers in the world. With the growth of ship-related industries, issues of concern to maritime labor made the region a hotbed of union activism, and this turbulent and important part of the region&#39;s maritime history is included in the author&#39;s analysis. The Coast Guard and its predecessor agencies were among the most visible symbols of federal authority in frontier California, and played a formative role in the state&#39;s maritime history. The US Navy&#39;s presence on the West Coast began with its establishment of a large shipyard and repair faci lity at Mare Island in 1853. Not to be overlooked, the recreational use of California&#39;s waters-from yachts and cruise ships to everyday boaters-is also given its due. Based on research from hundreds of primary sources, Beyond the Golden Gate is an excellent overview of the San Francisco Bay area&#39;s maritime past. Scholars will find the text, copious notes, and extensive bibliography of value. Unfortunately, it has no index. One point for potential readers to be aware of is that the subtitle is somewhat misleading: It is not a maritime history of California as a whole, but rather a more focused study of the San Francisco Bay area. A study of California&#39;s maritime history would have to discuss, or at least mention, the huge artificial harbor constructed at Los Angeles/Long Beach, the US Navy&#39;s former presence in Long Beach, and the importance and size of the naval presence in San Diego. These subjects are absent from this otherwise fine book. Timothy Lynch has given us a wellwritten and well-researched history of the San Francisco Bay area and is to be commended for his contribution of a welcome addition to the small but growing number of books dealing with West Coast maritime history. Beyond the Golden Gate is a book that should be in the library of anyone interested in the maritime history of the San Francisco Bay area, and the maritime history of California in general.

SUNY Press A comp rehensive history of the first three decades of underwater exploration in antebellwn A merica.. &quot; J erry Kuntz has filled in a prev iou s ly blank pa ge in t he story of diving- and clon e it well. The H eroic Age of Diving tells th e s tory not only of th e development of salva ge tec hnolo gy but a lso th e human side of this alwa ys-dangerou s and often-d eadly career ... This book is a window on an unexp lored (and unexpect ed) world , and the author deserves great credit for bringing it ba c k into the ligh t .&quot; -

Get a FREE Co

Email info@sshsa.org or call 1-401-463-35 70 and we&#39;ll send you a FREE copy and tell you how to subscribe_ STEAMSHIP HISTORICAL SOCIETY OF AMERICA INFO@SSHSA.ORG