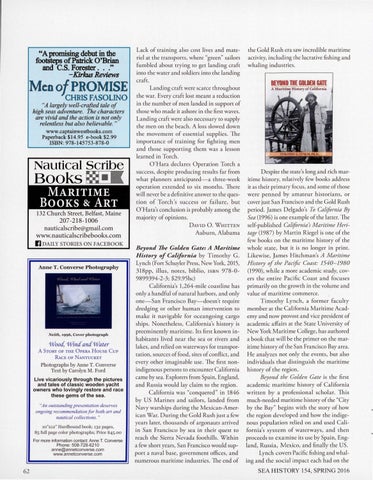 Wood; Wind" anaWater A STORY OF THE OPERA HousE Cur RACE OF NANTUCKET

Lack of training also cost lives and materiel at the transports, where "green" sailors fumbled about trying to get landing craft into the water and soldiers imo the landing craft. Landing craft were scarce throughou t the war. Every craft lost m eam a reduction in the number of men landed in support of those who m ade it ashore in the first waves. Landing craft were also necessary to supply the men on the beach. A loss slowed dow n the movemem of essemial supplies. The importance of training for fighting m en and those supporting chem was a lesson learned in Torch . O ' H ara declares Operation Torch a success, despite producing results fa r from wh at planners amicipated-a three-week operation extended to six momhs. There will never be a defi nitive answer to the question of Torch 's success or failure, but O'Hara's conclusion is probably among the m ajority of opinions. D AVID

Beyond The Golden Gate: A Maritime History of California by T imothy G. Lynch (Fort Schuyler Press, ew York, 2015, 318pp, illus, notes, biblio, I SBN 978-09899394-2-3; $29.95hc) California's 1,264-mile coastline has only a handful of natural harbors, and on ly one-San Francisco Bay-doesn't require dredging or other human imervemion to make it navigable for ocean going cargo ships . Nonetheless, Californi a's history is preeminemly m aritime. Its first known inhabirams lived near the sea or rivers and lakes, and relied on waterways for transportation, sources of food, sites of conflict, and every other imaginable use. The first nonindigenous persons to encounter California came by sea. Explorers from Spa in, England, and Russia wou ld lay claim to the region. California was "conquered" in 1846 by US Marines a nd sail o rs, landed from Navy warships during the Mexican-American War. During the Gold Rush just a few years later, thousands of argonauts arrived in San Francisco by sea in their quest to reach the Sierra Nevada foothills . Within a few short yea rs, San Francisco would support a naval base, gove rnment offices, and numerous m aritime industries. The end of

BEYOND THE GOJ.D(N GATE A Ma_ritime History of Ca li for nia

D espite the state's long and rich maritime history, relatively few books address it as their primary foc us, and some of chose were penned by amateur histo rian s, o r cover just San Francisco and the Gold Rush period. James Delgado's To California By Sea (1996) is one example of the latter. The self-published Califo rnia's Ma ritime H eritage (1987) by M artin Riegel is one of the few books on the maritime history of the whole state, but it is no longer in prim. Likewise, Jam es Hitchman's A Maritime H istory of the Pacific Coast: 1540- 1980 (1990), while a more academic study, covers the entire Pacific Coast and foc uses primarily on the growth in the volume and value of m a ritime commerce. Timothy Lynch , a former fac ult y member at the California Maritime Academy and now provost and vice presid ent of academic affairs at the State University of New York Maritime College, has authored a book chat wi ll be the primer on the m aritime history of the San Francisco Bay area. H e analyzes not only the evem s, but also individuals that distinguish the maritime history of the region. Beyond the Golden Gate is the first academic m aritime history of California written by a professional schola r. This much-needed maritime history of the "City by the Bay" begins with the story of how the region developed and how the indigenous popula tion relied on and used California's sys tem of waterways, a nd then proceeds to examine its use by Spain, England, Russia, Mexico, and finally the US. Lynch covers Pacific fishing and whaling and the social impact each had on the SEA HISTORY 154, SPRING 20 16