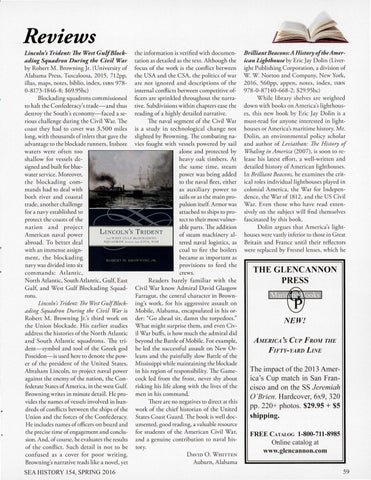 .Reviews Lincoln&#39;s Trident: The West GulfBlockading Squadron During the Civil War by Robert M. Browning Jr. (U niversicy of Alabama Press, Tuscaloosa, 20 15, 712pp, illus, maps, noces, biblio, index, ISBN 9780-8173-1846-8; $69.95hc) Blockading squadrons commissioned to hale che Confederacy&#39;s trade-and thus destroy the South&#39;s economy-faced a serious challenge during the Civi l War. The coast they had to cover was 3,500 miles long, with thousands of inlets that gave the advantage to the blockade runners . Inshore waters were often too shallow for vessels designed and built for bluewater service. Moreover, the blockading commands had to deal wich both rive r and coastal crade, anocher challenge for a navy esrablished to prorecc the coasts of che n acion and projecc American naval power abroad. To better deal wich an immense assignm ent, the blockading navy was divided into six commands: A d antic, N onh Atlam ic, South Atlamic, G ulf, East G ulf, and West G ulf Blockading Squadrons. Lincoln&#39;s Trident: The West GulfBlockading Squadron During the Civil War is Robert M. Browning Jr.&#39;s chird work on che Union blockade. His earlier srudies address the histories of the North Atlantic and South Atl antic squadrons. The trident-symbol and tool of che Greek god Poseidon-is used here to denote the power of che president of the United Scares, Abraham Lincoln, to project naval power against che enemy of the nation, the Confederate States of America, in the west Gulf. Browning writes in minute detail. H e provides the names of vessels involved in hund reds of conflicts between the ships of the U nion and the forces of the Confederacy. He includes names of officers on board and the precise time of engagement and conclusion. And, of course, he evaluates the resulcs of the conflict. Such detail is noc to be confused as a cover for poor writing. Browning&#39;s narrative reads like a novel, yet

the information is verified with documenratio n as detailed as the text. Although the foc us of the work is the conflict becween the USA and the CSA, the politics of war are nor ignored and descriptions of the internal conflicts between competitive officers are sprinkled throughout the narrative. Subdivisions within chapters ease the reading of a highly detailed narrative. The naval segment of the C ivi l War is a srudy in technological change not slighted by Browning. The combacing navies fought with vessels powered by sail alone and protected by heavy oak timbers. At the same time, steam power was being added to the naval fleer, either as auxiliary power to sails or as the main propulsion itself. Armor was anached to ships to protect to their most vulnerable parts. The addition of steam machinery altered naval logistics, as coal to fire the boilers became as important as provisions to feed the crews. Read ers barely familiar with the Civil War know Admiral David Glasgow Farragut, the central character in Browning&#39;s work, for his aggressive assault on Mobile, Alabama, encapsulated in his order: &quot;Go ahead sir, dam n the torpedoes.&quot; W hat might surprise them, and even Civil War buffs, is how much the admiral did beyond the Battle of Mobile. For example, he led the successful assault on New Orleans and the painfully slow Battle of the M ississippi while maintaining the blockade in his region of responsibility. The Gamecock led from the front, never shy about risking his life along with the lives of the men in his command. There are no negatives to direct at this work of the chief historian of the United States Coast G uard. The book is well documented, good reading, a valuable resource for srudents of the American C ivil War, and a genuine contribucion to naval history. D AVID

Brilliant Beacons: A History ofthe American Lighthouse by Eric Jay Dolin (Liverigh t Publishing Corporation, a division of W. W. Norton and Company, New Yo rk, 20 16, 560pp, appen, notes, index, ISBN 978-0-87 140-668-2; $29.95hc) Wh ile library shelves are weighted down with books on America&#39;s li ghthouses, this new book by Eric Jay Dolin is a must-read for anyone interested in lighthouses or America&#39;s maritime history. Mr. Dolin, an environmenta l policy scholar and author of Leviathan: The Histo ry of Whaling in America (2007), is soon to release his latest effort, a well-written and detailed history of American lighthouses. In Brilliant Beacons, he exam ines the critical roles individual lighthouses played in colon ial America, the War for Independence, the War of 1812, and the US Civil War. Even those who have read extensively on the subject will find themselves fascinated by this book. Dolin arg ues that America&#39;s li ghthouses were vastly inferior to those in Great Britain and France until their reflectors were replaced by Fresnel lenses, which he