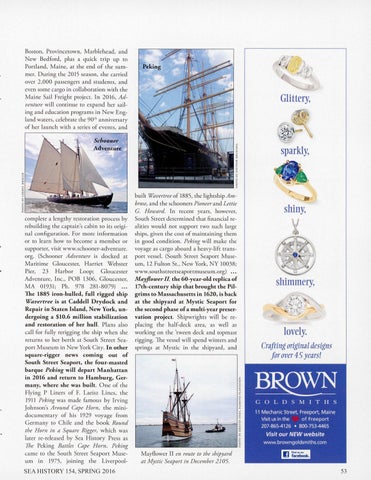 Boston, Provincetown, Marblehead, and N ew Bedford, plus a quick trip up to Portland, Maine, at the end of the summer. During the 2015 season, sh e carried over 2,000 passengers and students, and even some cargo in collaboration with the Maine Sail Freight proj ect. In 2016, Adventure will continue to expand her sailing and education programs in New England waters, celebrate the 90'" a nniversary of her launch w ith a series of events, and

complete a lengthy restoration process by rebuilding the captain's cab in to its original configuration. For more information or to learn how to become a member or supporter, visit www.schooner-adventure. org. (Schooner Adventure is docked at Maritime G loucester, Harriet Webster Pier, 23 H arbor Loop; G loucester Adventure, Inc., POB 1306, G lo uces ter, MA 0193 1; Ph. 978 281-8079) The 1885 iron-hulled, full rigged ship Wavertree is at Caddell Drydock and Repair in Staten Island, New York, undergoing a $10.6 million stabilization and restoration of her hull. Plans also call fo r fully rerigging the ship when she returns to her berth at South Street Seaport Museum in New York C ity. In other square-rigger news coming out of South Street Seaport, the four-masted barque Peking will depart Manhattan in 2016 and return to Hamburg, Germany, where she was built. O ne of the Flying P Liners of F. Laeisz Lines, the 1911 Peking was made fa mous by Irvi ng Joh nson's A round Cape Horn, the minidocumentary of his 1929 voyage from Germany to Chile and the book Round the Horn in a Square Rigger, w hich was later re-released by Sea History Press as The Peking Battles Cape Horn. Peking came to the South Street Seaport Museum in 1975, joining the Liverpool-

built Wavertree of 1885, the lightship Ambrose, and the schooners Pioneer and Lettie G. Howard. In recent years, however, South Street determined that financial realities wo uld not support two such large ships, given the cost of maintaining them in good condition. Peking will make the voyage as cargo aboard a heavy-lift transport vessel. (South Street Seaport Museum, 12 Fulton St., New York, NY 10038; www.southstreetseaportmuseum.org) ... Mayflower IL the 60-year-old replica of 17th-century ship that brought the Pilgrims to Massachusetts in 1620, is back at the shipyard at Mystic Seaport for the second phase of a multi-year preservation project. Shipwrights will be replacing the half-deck area, as well as working on the 'tween deck and topmast rigging. The vessel will spend winters and springs at Mystic in the shipyard, and

Mayflower II en route to the shipyard at Mystic Seaport in December 2105. 53