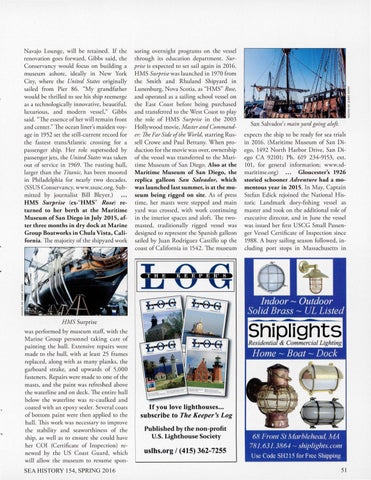 Navajo Lounge, will be retained . If the renovation goes forward, Gibbs said, the Conservancy would focus on building a museum as hore, ideally in N ew York City, where the United States originally sailed from Pier 86. &quot;My grandfather would be thrilled to see his ship reemerge as a technologically innovative, beautiful , luxurious, and modern vessel,&quot; G ibbs said. &quot;The essence of her will rem ain front and center.&quot; The ocean liner&#39;s maiden voyage in 1952 set the still-current reco rd fo r the fas test transAd antic crossing fo r a passenger ship. Her role supersed ed by passe nger jets, the United States was ra ken out of service in 1969. The rusting hull, larger than the Titanic, has been moo red in Philadelphia for nearly two decades. (SSUS Conservancy, www.ssusc.org. Submitted by journalist Bill Bleyer.) HMS Surprise (ex-&quot;HMS&quot; Rose) returned to her berth at the Maritime Museum of San Diego in July 2015, after three months in dry dock at Marine Group Boatworks in Chula Vista, California. The m ajority of the shipyard wo rk

soring overnight progra ms on the vessel through its edu cation department. Surprise is expected to set sail aga in in 2016. HMS Surprise was launched in 1970 from the Smith and Rhuland Shipyard in Lunenburg, Nova Sco tia, as &quot;HMS&quot; Rose, and operated as a sailing school vessel on the East Coas t before being purchased and transferred to the West Coast to play the role of H MS Surprise in the 2003 H ollywood movie, Master and Commander: The Far Side ofthe World, starring Russell C rowe and Paul Bettany. W hen production fo r the movie was over, ownership of the vessel was transferred to the M aritime Museum of San Diego. Also at the Maritime Museum of San Diego, the replica galleon San Salvador, which was launched last summer, is at the museum being rigged on site. As of press time, her masts were stepped and main ya rd was crossed, with wo rk continuing in the interior spaces and aloft. The twomas ted , traditionally rigged vessel was designed to represent the Spanish galleon sailed by Juan Rodriguez Castillo up the coast of Califo rnia in 1542. The museum

HMS Surprise was performed by museum staff, w ith the Marine G roup personnel taking care of painting the hull. Extensive repa irs were made to the hull, with at least 25 frames replaced, along with as m any planks, the ga rboard scrake, and upwa rds of 5,000 fas teners. Repai rs were made to one of the mas ts, and the paint was refreshed above the waterline and on deck. The enti re hull below the waterline was re-caulked and coated with an epoxy sealer. Several coats of bottom paint were then applied to the hull. Th is work was necessary to improve the stability and seaworthiness of the sh ip, as well as to ensure she could have her COI (Certificate of Inspection) renewed by the US Coast G uard, which will allow the museum to resume spon-

If you love lighthouses ...