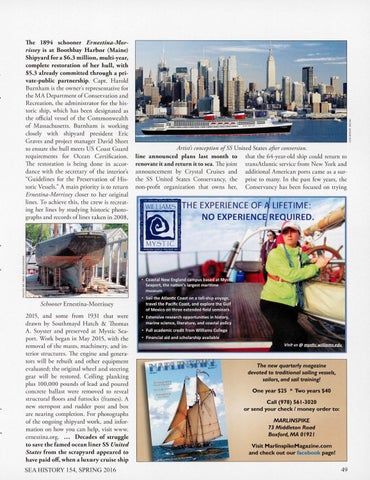 The 1894 schooner Ernestina-Morrissey is at Boothbay Harbor (Maine) Shipyard for a $6.3 million, multi-year, complete restoration of her hull, with $5.3 already committed through a private-public partnership . Capt. Harold Burnham is the owner's representative for the MA Department of Conservation and Recreation, the administraror for the historic ship, which has been designated as the official vessel of the Commonwealth of Massachusetts. Burnham is working closely with shipya rd presidem Eric Graves and project manager David Shorr to ensure the hull meets US Coas t G uard requiremem s for Ocean Certification. The restoration is being don e in accordance with the secretary of the imerior's "G uidelines for the Preservation of Historic Vessels." A main priority is to return Ernestina-Morrissey closer to h er original lines. To achieve this, the crew is recreating her lines by studying historic photographs and records oflines taken in 2008, t

Artists conception of SS United States after conversion. line announced p lans last mont h to that the 64-year-old ship could return to renovate it and return it to sea. The joint transAtlamic service from New York and announcemem by Crys tal Cruises and additional American ports came as a surthe SS United States Conservancy, the prise to many. In the pas t few years, the non-profit organization that owns her, Conservancy has been focused on trying

2015 , and some from 193 1 that were drawn by Southmayd Hatch & Thomas A. Soyster and preserved at Mystic Seaport. Work began in May 2015, with the removal of the masts, machinery, and interior structures. The engine and generators will be rebuilt and other equipmem evaluated ; the original wheel and steering gear will be restored. Ceiling planking plus 100,000 pounds of lead and poured concrete ballast were removed to reveal st ructu ral floors and futtocks (frames). A new sternpost and rudder p ost and box are nearing completion. For photographs of the ongoing shipya rd work, and information on how yo u can help, visit www. ernes tina.org. . . . Decades of struggle to save the famed ocean liner SS United States from the scrapyard appeared to have paid off, when a lu xury cruise ship

Call (978) 561-3020 or send your check I money order to: MARLINSPIKE. 73 Middleton Road Boxford, MA 01921 Visit MarlinspikeMagazine.com and check out our facebook page!