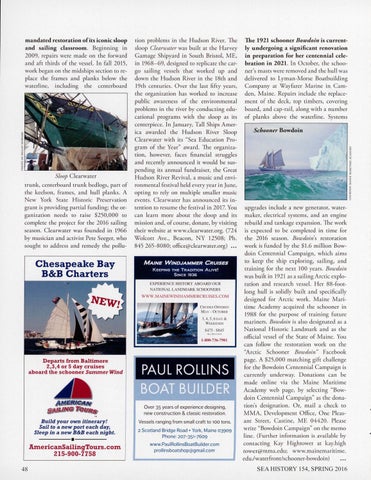 mandated restoration of its iconic sloop and sailing classroom. Beginning in 2009, repairs were made on the forward and aft thi rds of the vessel. In fall 2015, wo rk began on the midships section to replace the frames and planks below the waterl ine, including the centerboard

trunk, centerboard trunk bedlogs, part of the keelson, frames, and hull planks. A New York State Historic Preservation grant is providing partial funding; the organization needs to raise $25 0,000 to complete the project for the 2016 sailing season. Clearwater was founded in 1966 by musician and activist Pete Seeger, who sought to address and remedy the pollu-

tion problems in the Hudson River. The sloop Clearwater was built at the Harvey Gamage Shipya rd in South Bristol, ME, in 1968-69, designed to replicate the cargo sailing vessels that worked up and dow n the Hudson River in the 18th and 19th centuries. Over the las t fifty yea rs, the organization has worked to increase public awa reness of the environmental problems in the river by conducting educational programs with the sloop as its centerpiece. In January, Tall Ships America awa rded the Hudson River Sloop C learwater with its "Sea Education Program of the Year" award. The organization, however, faces financial struggles and recently announced it would be suspending its annual fundraiser, the Great Hudson River Revival, a music and environmental festival held every year in June, opting to rely on multiple smaller music events. C learwater has announced its intention to resume the festival in 2017. You ca n lea rn more about the sloop and its mission and, of course, donate, by visiting their website at www.clearwater.org. (724 Wolcott Ave. , Beacon, NY 12508; Ph . 845 265-808 0; office@clearwater.org) .. . MAINE WINDJAMMER CRUISES KEEPING THE TRADITION ALIVE! SINCE 1936

The 1921 schooner Bowdoin is currently u ndergoing a sign ificant renovation in prep aration for h er centennial celebration in 2021. In October, the schooner's masts were removed and the hull was delivered to Lyman-Morse Boatbuilding Company at Wayfarer Marine in Camden, M aine. Repairs include the replacement of the deck, top timbers, covering board, and cap-rail, along with a number of planks above the waterline. System s

upgrades include a new generator, watermaker, electrical sys tems, and an en gine rebuild and tankage expansion . The work is expected to be completed in time for the 2016 season. Bowdoin's resroration work is funded by the $1.6 million Bowdoin Centennial Campaign, which aims to keep the ship exploring, sailing, and trai ning for the next 100 years . Bowdoin was built in 1921 as a sailing Arctic exploration and research vessel. Her 88-footlon g hull is solidly built and specifically des igned for A rctic wo rk. Maine Maritime Academy acquired the schooner in 1988 for the purpose of trai ning future mariners. Bowdoin is also designated as a National Historic Landmark and as the official vessel of the State of Maine. Yo u can follow the restoration work on the "Arctic Schooner Bowdoin" Facebook page. A $25, 000 matching gift challenge for the Bowdoin Centennial Campaign is currently underway. D on ations can be made online via the Maine Maritime Academy web page, by selecting "Bowdoin Centen nial Campaign" as the donation 's designation. Or, mail a check to MMA, D evelopment Office, One Pleasant Street, Castine, ME 04420. Please write "Bowdoin Campaign" on the memo line. (F urther information is available by contacting Kay Hightower at kay.high tow<er@mma.edu; www.mainemaritime. edu ii waterfront/schooner-bowdoin)