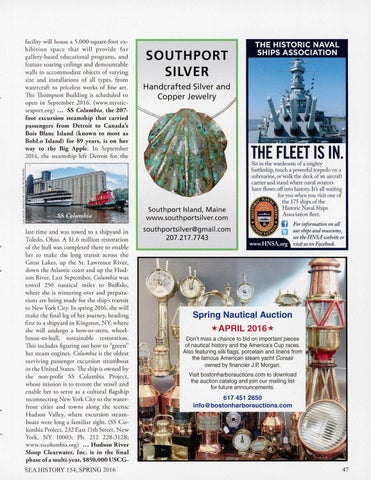 facility will house a 5,000-square-foot exhibition sp ace th at will provide for gallery-based educational programs, and feature soaring ceilings and demountable walls to accommodate objects of varying size and installations of all types, from watercraft to priceless wo rks of fine art. The Thompson Building is scheduled to open in September 2016. (www.mys ticseaport.org) . . . SS Columbia, the 207foot excursion steamship that carried passengers from Detroit to Canada&#39;s Bois Blanc Island (known to most as BobLo Island) for 89 years, is on her way to the Big Apple. In September 2014, the steamship left Detroit for the

THE FLEET IS IN.

Southport Island, Maine www.southportsiIver.com las t time and was rowed to a shipyard in Toledo, Ohio. A $1.6 million restoration of the hull was completed there to enable her to make the long transit across the G reat Lakes, up the St. Lawrence River, down the Atlantic coast and up the Hudson River. Last September, Columbia was rowed 250 nautical miles to Buffalo, where she is wintering over and preparations are being made for the ship&#39;s transit to New York C ity. In spring 20 16, she will make the fin al leg of her journey, heading first to a shipya rd in Kingston, NY, where she will undergo a bow-to-stern, wheelhouse-to-hull, sustainable restoration. This includes fi guring out how to &quot;green&quot; her steam engines. Columbia is the oldest surviving passenger excursion steamboat in the United States. The ship is owned by the non-profit SS Columbia Proj ect, whose mi ssion is to restore the vessel and enable her to serve as a cultural flagship reconnecting New York City to the waterfront cities and towns along the scenic Hudson Valley, where excursion steamboats were long a familiar sight. (SS Columbia Project, 232 East 11th Street, New York, NY 10003; Ph. 212 228-3128; www.sscolumbia.org) ... Hudson River Sloop Clearwater, Inc. is in the final phase of a multi-year, $850,000 USCG-

Sit in the wardroom of a mighty battleship, touch a powerful torpedo on a submarine, or walk the deck of an aircraft carrier and stand where naval aviators have flown off into history. It&#39;s all waiting for you when you visit one of ~--QI~ the 175 ships of the Historic Naval Ships - - ÂˇÂˇldl Association fleet.

For iriformation on all our ships and museums, see the HNSA website or www.HNSA.org visit us on Facebook.