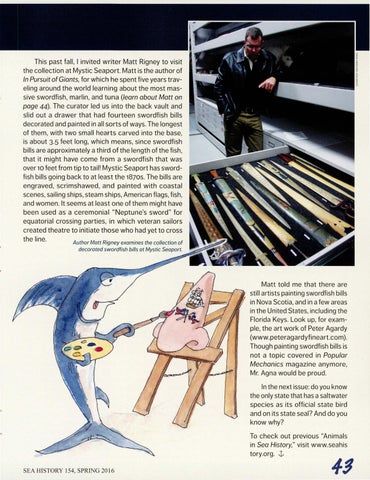 This past fall, I invited writer Matt Rigney to visit the collection at Mystic Seaport. Matt is the author of In Pursuit of Giants, for which he spent five years traveling around the world learning about the most massive swordfish, marlin, and tuna (learn about Matt on page 44). The curator led us into the back vault and slid out a drawer that had fourteen swordfish bills decorated and painted in all sorts of ways. The longest of them, with two small hearts carved into the base, is about 3.5 feet long, which means, since swordfish bills are approximately a third of the length of the fish, that it might have come from a swordfish that was over 10 feet from tip to tail! Mystic Seaport has swordfish bills going back to at least the 1870s. The bills are engraved , scrimshawed , and painted with coastal scenes, sailing ships, steam ships, American flags, fish, and women. It seems at least one of them might have been used as a ceremonial &quot; Neptune&#39;s sword &quot; for equatorial crossing parties, in which veteran sailors created theatre to initiate those who had yet to cross the line. Author Matt Rigney examines the collection of decorated swordfish bills at Mystic Seaport.

Matt told me that there are still artists painting swordfish bills in Nova Scotia, and in a few areas in the United States, including the Florida Keys. Look up, for exam ple, the art work of Peter Aga rdy (www.peteragardyfineart.com). Though painting swordfish bills is not a topic covered in Popular Mechanics magazine anymore, Mr. Agna would be proud. In the next issue: do you know the only state that has a saltwater species as its official state bird and on its state seal? And do you know why? To check out previous &quot;Animals in Sea History,&quot; visit www.seahis tory.org. ;t SEA HISTORY 154, SPRING 2016