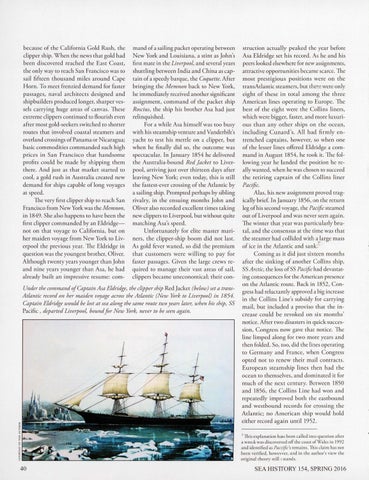 because of the Californ ia G old Rush, the clipper ship. W hen the news that gold had been discovered reached the East Coast, the only way to reach San Francisco was to sail fifteen tho usand miles around Cape H orn. To meet fre nzied demand for fas ter passages, naval a rchitects designed a nd shipbuilders produced longer, sha rper vessels carrying huge a reas of canvas. These extreme clippers continued to flourish even after most gold-seekers switched to shorter ro utes that involved coas tal steamers a nd overland crossings of Panama or N icaragua; basic commodities commanded such h igh p rices in San Fra ncisco th at h a ndsom e profits could be m ade by shipping them there. And just as that m arket started to cool, a gold rush in Australia created new demand fo r ships capable of long voyages at speed. The very firs t clipper ship to reach San Francisco from New York was the Memnon, in 1849. She also happens to have been the first clipper commanded by an Eldridgenot on that voyage to California, but on her m aiden voyage fro m New Yo rk to Liverpool the prev ious year. The Eld ridge in question was the younges t bro ther, O liver. Although twenty years younger than Joh n and nine yea rs yo unger than Asa, he had already built an impressive resume: com-

m and of a sailing packet operating between New York and Louisiana, a stint as John's first mate in the Liverpool, and several years shuttling between India and China as captain of a speedy barque, the Coquette. After bringing the Memnon back to New Yo rk, he immediately received another significant assignment, com mand of the packet ship Roscius, the sh ip his bro ther Asa had just relinquished . For a while Asa himself was too busy with his steamship venture and Va nderbilt's yacht to test his m ettle on a clipper, but when he fi nally did so, the outcome was spectacular. In January 1854 he delivered the Australia-bo und Red jacket to Liverpool, arriving just over thirteen days afte r leaving New Yo rk; even today, this is still the fas test-ever crossi ng of the Atlantic by a sailing ship. Prompted perhaps by sibling rivalry, in the ensuing m onths John and Oliver also recorded excellent times taking new clippers to Liverpool, but without quite m atching Asa's speed . U n fo rtunately fo r elite mas ter m ariners, the clipper-ship boo m d id not las t. As gold fever wa ned, so did the premiu m that cusro m ers were w illing to pay for fas ter passages . G iven the large crews required to m anage their vast areas of sail, clippers became uneconomical; their con-

Under the command ofCaptain Asa Eldridge, the clipper ship Red Jacket (below) set a transAtlantic record on her maiden voyage across the Atlantic (New York to Liverpool) in 1854. Captain Eldridge would be lost at sea along the same route two years later, when his ship, SS Pacific, departed Liverpool, bound for New York, never to be seen again.

struction actually p eaked the year before Asa Eldridge set his record . As he and his peers looked elsewhere fo r new assignments, attrac tive opportunities became scarce. The m ost pres tigio u s position s were on th e transAd antic steam ers, but theâ&#x20AC;˘e were only eight of th ese in total am on g th e three Am erican lines operating to Euro pe. The best of the eight we re the Collins liners, which were bigger, faste r, and more luxurio us th an any o the r shi ps on th e ocean , including C una rd 's. A ll h ad firml y entrenched captains, however, so when one of the lesser lines offered Eldridge a comm and in August 1854, he rook it. The fo llowing year he la nded the position he really wa nted, when he was chosen to succeed the re tiring captain of the Collin s liner Pacific. Alas, his new assignment proved tragically brief. In Ja nua ry 1856, on the return leg of h is second voyage, the Pacific steamed o ut of Liverpool and was never seen again. The wi nter that year was particularly brutal, and the consensus at the time was that the steamer had collided with aJarge m ass of ice in the Atl antic and sank.' Coming as it did just sixteen m onths after the sinki ng of another Collins shi p, SS Arctic, the loss of SS Pacific had devastating consequences for the American presence o n the Atlantic ro ute. Back in 1852, Congress had reluctantly approved a big increase in the C ollins Line's subsidy for carrying mail, but included a prov iso that the increase could be revoked o n six m onths' notice. After two disasters in quick succession, Congress now gave that notice. 1h e line limped along for two more yea rs and then fo lded. So, roo, did the lines operating to Germany a nd France, when Congress opted no t to ren ew their m ail contracts. European steam ship lines then h ad the ocean to them selves, and dominated it fo r much of the next century. Betwee n 185 0 and 1856, the Collins Line had wo n and repeatedly improved both the eas tbound and wes tbo und reco rds for cross ing the A tlantic; no American ship wo uld hold either record again until 1952 . 1 Th is expl anation hms been called into questio n after a wreck was d iscoverred off the coas t of Wa les in 1992 and identified as Paccific's re m ain s. Th is cla im has not been verified , howevver, and in the author's view the origi nal t heory st ill 'stands.