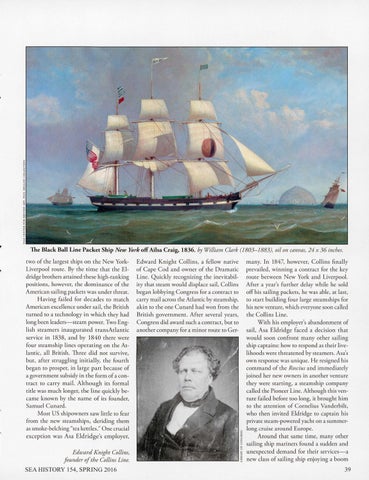 The Black Ball Line Packet Ship New York off Ailsa Craig, 1836, by William Clark (1803-1883), oil on canvas, 24 x 36 inches. two of the largest ships on the New YorkLiverpool route. By rhe time that the Eldridge brothers attained these high-ranking positions, however, the dominance of the American sailing packers was under threat. Having failed for decades to march American excellence under sail, the British turned to a technology in which they had long been leaders-steam power. Two English steamers inaugurated transAdantic service in 1838, and by 1840 there were four steamship lines operating on the Atlantic, all British. Three did not survive, bur, after struggling initially, the fourth began to prosper, in large part because of a government subsidy in the form of a contract to carry mail. Although its formal tide was much longer, the line quickly became known by the name of its founder, Samuel Cunard. Most US shipowners saw little to fear from the new steamships, deriding them as smoke-belching "tea kettles." One crucial exception was Asa Eldridge's employer,

Edward Knight Collins, a fellow native of Cape Cod and owner of the Dramatic Line. Quickly recognizing the inevitability that steam would displace sail, Collins began lobbying Congress for a contract to carry mail across the Atlantic by steamship, akin to the one Cunard had won from the British government. After several years, Congress did award such a contract, but to another company for a minor route to Ger-

many. In 1847, however, Collins finally prevailed, winning a contract for the key route between New York and Liverpool. After a year's further delay while he sold off his sailing packers, he was able, at last, to start building four large steamships for his new venture, which everyone soon called the Collins Line. With his employer's abandonment of sail, Asa Eldridge faced a decision that would soon confront many other sailing ship captains: how to respond as their livelihoods were threatened by steamers. Asa's own response was unique. He resigned his command of the Roscius and immediately joined her new owners in another venture they were starting, a steamship company called the Pioneer Line. Although this venture failed before too long, it brought him to the attention of Cornelius Vanderbilt, who then invited Eldridge to captain his private steam-powered yacht on a summerlong cruise around Europe. Around that same time, many other sailing ship mariners found a sudden and unexpected demand for their services-a new class of sailing ship enjoying a boom