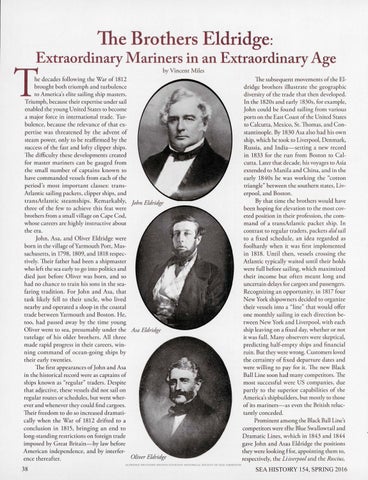 e decades following the War of 181 2 rought both triumph and turbulence o America's elite sailing ship masters. Triumph, because their expertise under sail enabled the young United States to become a major force in international trade. Turbulence, because the relevance of that expertise was threatened by the advent of steam power, only to be reaffirmed by the success of the fast and lofty clipper ships. The difficulty these developments created for master mariners can be gauged from the small number of captain s known to have commanded vessels from each of the period 's most important classes: transAtlantic sailing packets, clipper ships, and transAtlantic steamships. Remarkably, three of the few to achieve this feat were brothers from a small village on Cape Cod, whose careers are highly instructive about the era. John, Asa, and Oliver Eldridge were born in the village ofYarmouth Port, Massachusetts, in 1798, 1809, and 1818 respectively. Their fat her had been a shipmaster who left the sea early to go into politics and died just before Oliver was born, and so had no chance to train his sons in the seafaring tradition. For John and Asa, that task likely fell to their uncle, who lived nearby and operated a sloop in the coastal trade between Yarmouth and Boston. He, too, had passed away by the time young Oliver went to sea, presumably under the Asa Eldridge rutelage of his older brothers. All three made rapid progress in their careers, wi nning command of ocean-going ships by their early twenties. The first appearances of John and Asa in the historical record were as captains of ships known as "regular" traders. Despite that adjective, these vessels did not sail on regular routes or schedules, but went wherever and whenever they could find cargoes. Their freedom to do so increased dramatically when the War of 1812 drifted to a conclusion in 1815, bringing an end to long-standing restrictions on foreign trade imposed by Great Britain-by law before American independence, and by interference thereafter. ELDRIDGJ;.. BROTHERS

The subsequent movements of the Eldridge brothers illustrate the geographic diversity of the trade that then developed. In rhe 1820s and early 1830s, for example, John could be found sailing from various ports on the East Coast of the United Stares to Calcutta, Mexico, Sr. Thomas, and Constanti nople. By 1830 Asa also had his own ship, which he rook to Liverpool, Denmark, Russia, and India-setting a new record in 1833 for the run from Boston to Calcutta. Later that decade, his voyages to Asia extended to Manila and China, and in the early 1840s he was working the "cotton triangle" between the southern states, Liverpool, and Boston. By that rime the brothers would have been hoping for elevation to the most covered position in their profession, the command of a transAtlantic packer ship. In contrast to regular traders, packets did sail to a fixed schedule, an idea regarded as foolhardy when it was first implemented in 1818. Until then, vessels crossing the Atlantic typically waited until their holds were full before sai ling, which maximized their income bur often meant long and uncertain delays for cargoes and passengers. Recognizing an opportunity, in 1817 four New York shipowners decided to organize their vessels into a "line" that would offer one monthly sailing in each direction between New York and Liverpool, with each ship leaving on a fixed day, whether or not it was full. Many observers were skeptical, predicting half-empty ships and financial ruin. But rheywere wrong. Customers loved the certainty of fixed departure dates and were willing to pay for it. The new Black Ball Line soon had many competitors. The most successful were US companies, due partly to the superior capabilities of the America's shipbuilders, but mostly to those of its mariners-as even the British reluctantly conceded. Prominenr amiong the Black Ball Line's competitors were dhe Blue Swallowtail and Dramatic Lines, wvhich in 1843 and 1844 gave John and Asaa Eldridge the positions they were looking f for, appointing them to, respectively, the Liiverpool and the Roscius, COURTESY HISTOIUC,\L SOCIET\' OF OLD YARMOUTH