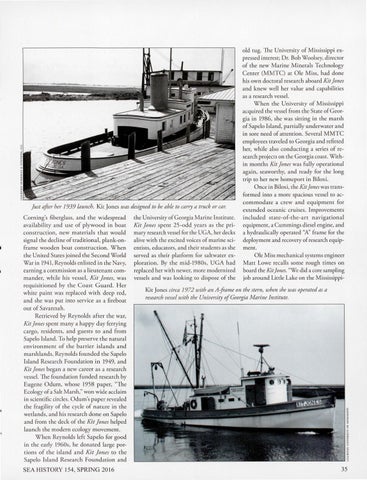 j ust after her 1939 launch. Ki t Jones was designed to be able to carry a truck or car.

Corning&#39;s fiberglass, and the w idespread availability and use of plywood in boat construction, new m aterials that would signal the decline of traditional, plank-onfra me wooden boat constr uc tion. When the United States joined the Second World War in 1941, Reynolds enlisted in the N avy, earning a commission as a lieutenant comm ander, wh ile his vessel, Kit J on es, was requ isitioned by the Coas t G uard. H er w hite paint was replaced with deep red , and she was put into service as a fireboat out of Savannah . Retrieved by Reynolds a fter the war, Kit J ones spent m any a happy d ay ferrying cargo, residents, and guests to and from Sapelo Island . To help preserve the natural env iron ment of the barrier islands and marshlands, Reynolds fo unded the Sapelo Island Research Foundation in 1949, and Kit J ones began a new career as a research vessel. The fo undation funded research by Eugene O dum, whose 1958 p aper, &quot;The Ecology of a Salt Marsh,&quot; won w ide acclaim in scientific circles. O dum&#39;s pap er revealed the frag ility of the cycle of n ature in the wetlands, and his resea rch don e on Sapelo and from the deck of the Kit J ones helped launch the modern ecology m ovement. W hen Rey nolds left Sap elo for good in the early 1960s, he donated large portions of th e island and Kit J ones to the Sapelo Island Research Foundation and

the University of Georgia Marine Institute. Kit Jo nes spent 25-odd years as the primary research vessel fo r the UGA, her decks alive with the excited voices of marine scientists, educators, and their students as she served as their platfo rm fo r saltwater exploration. By the mid-1 98 0s, UGA had replaced her with newer, more moderni zed vessels and was looking to dispose of the

old tug. The University of M ississ ippi expressed interest; D r. Bob Woolsey, di rector of the new Mari ne Minerals Technology Center (M MTC) at O le Miss, had done his own doctoral research aboard Kit J ones and knew well her value and capabilities as a resea rch vessel. W hen the U niversity of M ississippi acquired the vessel from the State of Georgia in 1986, she was sitting in the marsh of Sapelo Island, partially underwater and in sore need of attention. Several MMTC employees traveled to Georgia and refitted her, while also conducting a series of research proj ects on the Georgia coast. Within months Kit Jones was fully operational aga in, seaworthy, and ready fo r the long trip to her new homeport in Biloxi. Once in Biloxi, the KitJones was transformed into a more spacious vessel to accommodate a crew and equipment for ex tended oceanic cruises . Improve ments incl uded state-of-the-art n avigati onal equipment, a C ummings diesel engine, and a hydraulically operated &quot;A:.&#39; frame for the deployment and recovery of research equipment. Ole Miss mechanical systems engineer M att Lowe recalls some rough times on board the Kit Jo nes. &quot;We did a core sampling job around Little Lake on the M ississippi-

Kit Jones circa 1972 with an A-frame on the stern, when she was op erated as a research vessel with the University of Georgia Marine Institute.