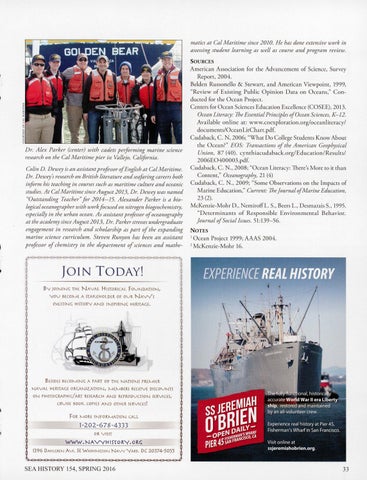 matics at Cal Maritime since 2010. He has done extensive work in assessing student Learning as weff as course and program review. SOURCES

Dr. A lex Parker (center) with cadets performing marine science research on the Cal Maritime pier in Vaffejo, California. Colin D. Dewey is an assistant professor ofEnglish at Cal Maritime. Dr. Dewey's research on B ritish Literature and seafaring careers both inform his teaching in courses such as maritime culture and oceanic studies. At Cal Maritime since August 2013, Dr. Dewey was named "Outstanding Teacher" for 2014-15. Alexander Parker is a biological oceanographer with work focused on nitrogen biogeochemistry, especially in the urban ocean. As assistant professor of oceanography at the academy since August 2013, Dr. Parker stresses undergraduate engagement in research and scholarship as p art of the expanding marine science curriculum . Steven Runyon has been an assistant professor of chemistry in the department of sciences and mathe-