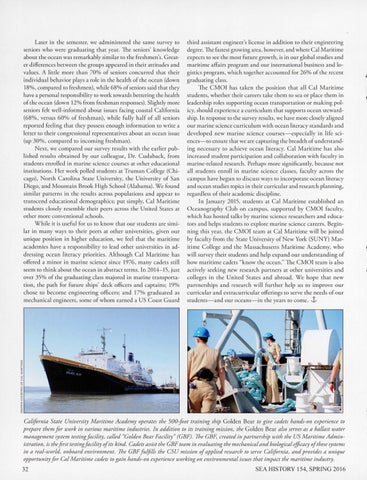 Later in the semester, we administered the same survey to seniors who were graduating that yea r. The seniors&#39; knowledge about the ocean was remarkably similar to the freshmen&#39;s. Greater differences between the groups appeared in their attitudes and values. A little more than 70% of seniors concurred that their individual behavior plays a role in the health of the ocean (down 18%, compared to freshmen), while 68% of seniors said that they have a personal responsibility to work towards bettering the health of the ocean (down 12% from freshman responses). Slightly more sen iors felt well-informed about issues facing coastal California (68%, versus 60% of freshman), while fully half of all seniors reported feeling that they possess enough information to write a letter to their congressional representatives about an ocean issue (up 30%, compared to incoming freshman) . Next, we compared our survey results with the earlier published results obtained by our colleague, Dr. Cudaback, from students enrolled in marine science courses at o ther education al institutions. H er work polled students at Truman College (Chicago), North Carolina State University, the University of San Diego, and Mountain Brook High School (A labama). We found similar patterns in the results across populations and appear to transcend educational demographics; put simply, Cal Maritime students closely resemble their peers across the United States at other more conventional schools. While it is useful for us to know that our students are similar in many ways to their peers at other universities, given our unique position in higher education, we feel that the maritime academies have a responsibility to lead other universities in addressing ocean literacy priorities. A lthough Cal Maritime has offered a minor in marine science since 1976, many cadets still seem to think about the ocean in abstract terms. In 2014- 15, just over 35% of the graduating class majored in marine transportation, the path for future ships&#39; deck officers a nd capta in s; 19% chose to become engineeri ng officers; and 17% graduated as mechanical engineers, some of whom earned a US Coast Guard

third assistant engineer&#39;s license in addition to their engineering degree. The fastest growing area, however, and where Cal Maritime expects to see the most future growth, is in our global studies and m aritime affairs program and our international business and logistics program, which togerher accounted for 26% of the recent graduating class. The CMOI has taken the posirion th ar all Cal Maritime students, whether their careers take rhem to sea or place them in leadership roles supporting ocean transportarion or making policy, should experience a curriculum that supports ocean stewardship. In response to the survey res ults, we have more closely aligned our marine science curriculum w ith ocea n literacy standards and developed new marine science courses-especially in life sciences- to ensure that we are capturing the breadth of understanding necessary to ach ieve ocea n literacy. Cal Maritime has also increased student participation and collaboration with fac ulty in marine-related research. Perhaps more significantly, because not all students enroll in marine science classes, fac ulty across the campus have begun to discuss ways to incorporate ocean literacy and ocean studies topics in their curricular and research planning, regardless of their academic discipline. In January 2015, students at Cal Maritime established an Oceanography Club on campus, supported by CMOI faculty, which has hosted talks by marine science researchers and educators and helps students to explore marine science careers. Beginning this year, the CMOI team at Cal Maritime will be joined by facu lty from the State University of New York (SUNY) Maritime College and the Massachusetts Maritime Academy, who wi ll survey their students and help expand our understanding of how maritime cadets &quot;know the ocean.&quot; The CMOI team is also actively seeking new research partners at other universities and colleges in the United States and abroad. We hope that new partnerships and research will further help us to improve our curricular and extracurricular offerings to serve the needs of our students-and our oceans-in the years to come. j:,

California State University Maritime Academy operates the 500joot training ship Golden Bear to give cadets hands-on experience to prepare them for work in various maritime industries. In addition to its training mission, the Golden Bear also serves as a ballast water management system testing.facility, called &quot;Golden Bear Facility&quot; (GBF). The GBF, created in partnership with the US Maritime Administration, is the first testing.facility ofits kind. Cadets assist the GBF team in evaluating the mechanical and biological efficacy ofthese systems in a real-world, onboard environment. The GBF fulfills the CSU mission of applied research to serve California, and provides a unique opportunity for Cal Maritime cadets to gain hands-on experience working on environmental issues that impact the maritime industry.