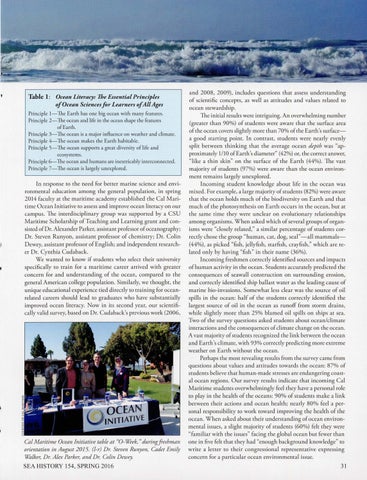 In response to the need for better marine science and environmental education among the general population, in spring 2014 faculty at the maritime academy established the Cal Maritime Ocean Initiative to assess and improve ocean literacy on our campus. The interdisciplinary group was supported by a CSU Maritime Scholarship of Teaching and Learning grant and consisted of Dr. Alexander Parker, assistant professor of oceanography; Dr. Steven Runyon, assistant professor of chemistry; Dr. Colin Dewey, assistant professor of English; and independent researcher Dr. Cynthia Cudaback. We wanted to know if students who select their university specifically to train for a maritime career arrived with greater concern for and understanding of the ocean, compared to the general American college population. Similarly, we thought, the unique educational experience tied directly to training for oceanrelated careers should lead ro graduates who have substantially improved ocean literacy. Now in its second year, our scientifically valid survey, based on Dr. Cudaback&#39;s previous work (2006,

and 2008, 2009), includes questions that assess understanding of scientific concepts, as well as attitudes and values related to ocean stewardship. The initial results were intriguing. An overwhelming number (greater than 90%) of students were aware that the surface area of the ocean covers slightly more than 70% of the Earth &#39;s surfacea good starting point. In contrast, students were nearly even ly split between thinking that the average ocean depth was &quot;approximately 1/10 of Earth &#39;s diameter&quot; (42%) or, the correct answer, &quot;like a thin skin&quot; on the surface of the Earth (44%). The vast majority of students (97%) were aware than the ocean environment remains largely unexplored. Incoming student knowledge abo ut life in the ocean was mixed. For example, a large majority of students (82%) were aware that the ocean holds much of the biodiversity on Earth and that much of the phorosynthesis on Earth occurs in the ocean, but at the same time they were unclear on evolutionary relationships among organisms. When asked which of several groups of organisms were &quot;closely related,&quot; a similar percentage of students correctly chose the group &quot;human, cat, dog, seal&quot;-all mammals(44%), as picked &quot;fish, jellyfish, starfish, crayfish,&quot; which are related only by having &quot;fish &quot; in their name (36%). Incoming freshmen correctly identified sources and impacts of human activity in the ocean. Students accurately predicted the consequences of seawall construction on surrounding erosion, and correctly identified ship ballast water as the leading cause of marine bio-invasions. Somewhat less clear was the source of oil spills in the ocean: half of the students correctly identified the largest source of oil in the ocean as runoff from srorm drains, while slightly more than 25% blamed oil spills on ships at sea. Two of the survey questions asked students about ocean/climate interactions and the consequences of climate change on the ocean. A vast majority of students recognized the link between the ocean and Earth &#39;s climate, with 93% correctly predicting more extreme weather on Earth witho ut the ocean. Perhaps the most revealing results from the survey came from questions about values and attitudes towards the ocean: 87% of students believe that human-made stresses are endangering coastal ocean regions. Our survey res ults indicate that incoming Cal Maritime students overwhelmingly feel they have a personal role to play in the health of the oceans: 90% of students make a link between their actions and ocean health; nearly 80% feel a personal responsibility ro work toward improving the health of the ocean. When asked about their understanding of ocean environmental issues, a slight majority of students (60%) felt they were &quot;familiar with the issues&quot; facing the global ocean but fewer than one in five felt that they had &quot;enough background knowledge&quot; to write a letter to their congressional representative expressing concern for a particular ocean environmental issue.