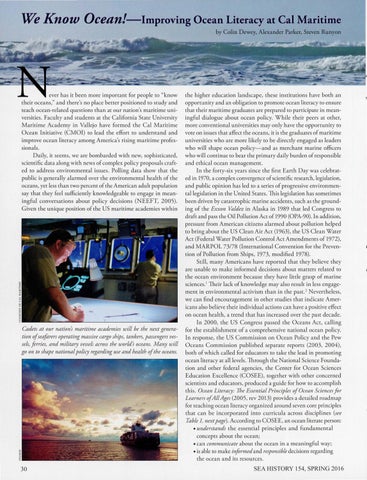 ever has it been more important for people to "know their oceans," and there's no place better positioned to study and teach ocean-related questions than at our nation's maritime universities. Faculty and students at the California State University Maritime Academy in Vallejo have formed the Cal Maritime Ocean Initiative (CMOI) to lead the effort to understand and improve ocean literacy among America's rising maritime professionals. Daily, it seems, we are bombarded with new, sophisticated, scienti fie data along with news of complex policy proposals crafted to address environmental issues. Polling data show that the public is generally alarmed over the environmental health of the oceans, yet less than two percent of the American adult population say that they feel sufficiently knowledgeable to engage in meaningful conversations about policy decisions (NEEFT, 2005). Given the unique position of the US maritime academies within

Cadets at our nation's maritime academies will be the next generation ofseafarers operating massive cargo ships, tankers, passengers vessels, ferries, and military vessels across the world's oceans. Many will go on to shape national policy regarding use and health ofthe oceans.

the higher education landscape, these institutions have both an opportunity and an obligation to promote ocean literacy to ensure char their maritime graduates are prepared to participate in meaningful dialogue abo ut ocean policy. While their peers at other, more conventional universities may only have the opportunity to vote on issues char affect the oceans, it is the graduates of maritime universities who are more likely to be directly engaged as leaders who will shape ocean policy-and as merchant marine officers who will continue to bear the primary daily burden of responsible and ethical ocean management. In the forty-six years since the first Earth Day was celebrated in 1970, a complex convergence of scientific research, legislation, and public opinion has led to a series of progressive environmental legislation in the United States. This legislation has sometimes been driven by catastrophic marine accidents, such as the grounding of the Exxon Valdez in Alaska in 1989 that led Congress to draft and pass the Oil Pollution Act of 1990 (OPA-90). In addition, pressure from American citizens alarmed about pollution helped to bring abo ut the US Clean Air Act (1963), the US Clean Water Act (Federal Water Pollution Control Act Amendments of 1972), and MARPOL 73/78 (International Convention for the Prevention of Pollution from Ships, 1973, modified 1978). Stil l, many Americans have reported char they believe they are unable to make informed decisions about matters related to the ocean environment because they have little grasp of marine sciences.1 Their lack of knowledge may also result in less engagement in environmental activism than in the pasr. 2 Nevertheless, we can find encouragement in other studies that indicate Americans also believe their individual actions can have a positive effect on ocean health, a trend that has increased over the past decade. In 2000, the US Congress passed the Oceans Act, calling for the establishment of a comprehensive national ocean policy. In response, the US Commission on Ocean Policy and the Pew Oceans Commission published separate reports (2003, 2004) , both of which called for educators to rake rhe lead in promoting ocean literacy at all levels. Through the National Science Foundation and other federal agencies, the Center for Ocean Sciences Education Excellence (COSEE), together with other concerned scientists and educators, produced a guide for how to accompli sh rh is. Ocean Literacy: The Essential Principles of Ocean Sciences for Learners ofAll Ages (2005 , rev 2013) provides a derailed roadmap for reaching ocean literacy organized around seven core principles that can be incorporated into curricula across disciplines (see Table 1, next page). According to COSEE, an ocean literate person: • understands the essential principles and fundamental concepts about the ocean; • can communicate about the ocean in a meaningful way; • is able to make informed and responsible decisions regarding the ocean and its resources. SEA HISTORY 154, SPRING 2016