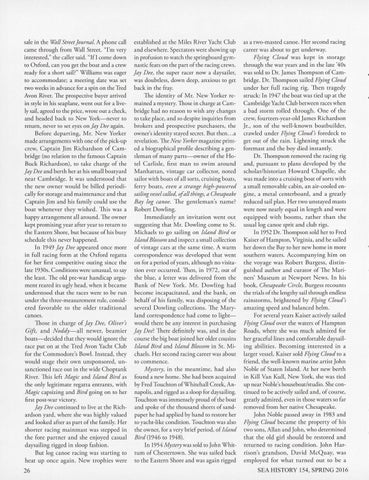 sale in the Wall Street j ournal. A phone call came through from Wall Street. &#39;Tm very interested,&quot; the caller said. &quot;IfI come down to O xford, can yo u get the boat and a crew ready for a short sail?&quot; W illiams was eager to accommodate; a m eeting date was set two weeks in advance fo r a spin on the Tred Avon River. The prospective buyer arrived in style in his seaplane, went out for a lively sail, agreed to the price, wrote out a check, and headed back to New York-never to return, never to set eyes on f ay Dee again . Before dep arting, Mr. New Yorker made arrangements with one of the pick-up crew, Captain Jim Rich ardson of Cambridge (no relation to the famous Captain Buck Richardson), to take charge of the Jay Dee and berth her at his small boatya rd near C ambridge. It was understood that the new ow ner would be billed periodically for storage and maintenance and that Captain Jim and his family could use the boat whenever they wish ed . This was a happy arrangement all around. The owner kept promising year after year to return to the Eastern Shore, but because of his busy schedule this never happened . In 1949 Jay Dee appeared once more in full racing form at the O xford regatta fo r her first competitive outing since the late 193 0s. Conditions were unusual, to say the least. The old pre-war handicap argument reared its ugly head, when it became understood that the races were to be run under the three-meas urement rule, considered favo rable to the older traditional canoes . Those in ch arge of j ay Dee, Oliver&#39;s Gift, and N oddy-all newer, b eamier boats-decided that they would ignore the race put on at the Tred Avon Yacht Club for the Commodore&#39;s Bowl. Instead , they would stage their own unsponsored, unsanctioned race out in the wide Choptank River. This left Magic and Island Bird as the only legitimate regatta entrants, with Magic capsizing and Bird going on to her fi rs t pos t-war victory. Jay Dee continued to live at the Richardson yard, where she was highly valued and looked after as part of the fa mily. H er shorter raci ng mai nmas t was stepped in the fo re partner and sh e enjoyed casual daysailing rigged in sloop fashion. But log canoe racing was starting to heat up once again . New trophies were 26

established at the Miles R iver Yacht C lub and elsewhere. Spectators were showing up in profusion to watch the springboard gymnas tic feats on the part of the racing crews. j ay Dee, the super racer now a daysailer, was doubtless, down deep, anxious to get back in the fray. The identity of Mr. New Yorker remained a mystery. Those in charge at Cambridge had no reason to wish any changes to take place, and so despite inquiries from brokers and prosp ective purch asers, the owner&#39;s identity stayed secret. But then . ..a revelation. The New Yorker magazine printed a biographical profile describing a gentleman of many parts-owner of the H otel Carlisle, first man to swim aro und Manhattan, vintage car collector, noted sailor with boats of all sorts, cruisi ng boats, fe rry boats, even a strange high-powered

sailing vessel called, ofall things, a Chesapeake Bay log canoe. The gentlem an&#39;s n am e? Robert D owling. Immedi ately an invitation went out suggesting that M r. D owling come to St. M ichaels to go sailing on Island Bird or Island Blossom and inspect a small collection of vintage cars at the same time. A warm correspondence was developed that went on for a period of years, although no visitation ever occurred. Then, in 1972, out of the blue, a letter was delivered from the Bank of New York. M r. D owling h ad become incapacitated , and the bank, on behalf of h is fa mily, was disposing of the several Dowling collections. The M aryland corres pondence had come to lightwould there be any interes t in purchasing jay Dee? There definitely was, and in due course the big boat joined her older cousins Island Bird and Island Blossom in St. M ichaels. H er second racing career was about to commence. Mystery, in the mea ntime, h ad also fou nd a new home. She had been acquired by Fred Touchton ofWhitehall C reek, Annapolis, and rigged as a sloop fo r daysailing. Touchton was immensely pro ud of the boat and spoke of the thousand sheers of sandpaper he had applied by hand to restore her to yacht-like condition. Touchto n was also the owner, fo r a very brief period, of Island Bird (1946 to 1948). In 1954 Mystery was sold to John W hittum of Chestertown. She was sailed back to the Eastern Shore and was again rigged

as a rwo-mas red canoe. H er second racing career was about to get underway. Flying Cloud was k ept in storage through rhe war years and in the !are &#39;40s was sold to D r. James Thompson of C ambridge. Dr. Thompson sailed Flying Cloud under h er full racing ri g. Then tragedy struck: In 1947 the boar was tied up at the Cambridge Yacht Club between races when a bad storm rolled through . One of the crew, fo urteen-year-old James Richardson Jr., son of rh e well-known boatbuilder, crawled under Flying Cloud&#39;s foredeck to get our of rhe rain. Lightning struck rhe fo remas t and the boy died instantly. Dr. Thompson removed the racing rig and, pursuant to plans developed by the scholar/ historian H oward C h apelle, she was made into a cruising boat of sorts with a small removable cabin, an air-cooled engine, a metal centerboard , and a greatly reduced sail plan. H er two unstayed masts were now nearly equal in length and were equipped w ith boom s, rather th an the usual log canoe sprit and club rigs . In 1952 Dr. Thompson sold her to Fred Kaiser of H ampton, Virginia, and he sailed her down the Bay to her new home in more southern waters. Accom panying him on the voyage was Robert Burgess , distinguished author and curator of The M ariners&#39; Museum at Newp ort News. In his book, Chesapeake Circle, Burgess recounts the trials of rhe lengthy sail th rough endless rainstorms, brightened by Flying Cloud&#39;s amazing speed and balanced helm. For several yea rs Ka iser ac tively sailed Flying Cloud over rhe waters of H ampton Roads, where she was much admired fo r her graceful lines and comforta ble daysailing abilities. Becomin g inreresred in a larger vessel, Kaiser sold Flying Cloud to a frie nd, the well-known marine artist John Noble of Staten Island . At her new berth in Kill Van Kull, New York, she was tied up near N oble&#39;s houseboat/s tudio. She continued to be actively sailed and, of course, greatly admired, even in those waters so fa r removed from her native C hesapeake. John No ble passed away in 1983 and Flying Cloud became the property of his rwo sons, Allan and John, who determined that the old girl sh ould be restored and returned to racing condition. John H arrison&#39;s grandson, D avid M cQuay, was employed for wh at tu rned out to be a SEA HISTORY 154, SPRING 201 6