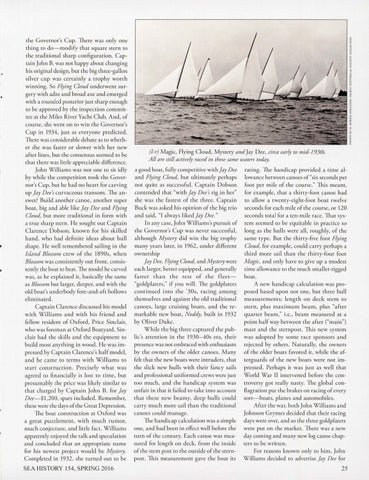 the Gove rnor&#39;s C up. There was only one thing to do-modify that square stern to the traditional sharp configuration . Captain John B. was not happy about changing his original design, but the big three-gallon si lver cup was certainly a trophy wort h winning. So Flying Cloud underwent surgery with adze and broad axe and emerged with a rounded posterior just sharp enough to be approved by the inspection committee at the M iles River Yacht C lub. And, of course, she went on to win rhe Governor&#39;s C up in 1934, just as everyone predicted. There was considerable debate as to whether she was faster or slower with her new after lines, bur the consensus seemed to be rhar there was lirrle appreciable difference. John Wi lliams was not one to sir idly by while the competition rook the Governor&#39;s C up, bur he had no heart for carv ing up j ay Dee&#39;s curvaceo us transom . The answer? Build another ca noe, another super boar, big and able like jay Dee and Flying Cloud, bur more traditional in form with a true sharp stern. H e sought our Captain C larence Dobson, known for his skilled hand, who had definite ideas about hull shape. He well remembered sailing in the Island Blossom crew of the 1890s, when Blossom was consistently our from, consistenrly the boar to bear. The model he carved was, as he explained ir, basically rhe same as Blossom bur larger, deeper, and w ith the old boar&#39;s underbody fore-and-aft hollows eliminated. Captain C larence discussed his model with Wi lliam s and with his fri end and fellow resident of Oxford, Price Sinclair, who was foreman at Oxford Boatya rd. Sinclair had rhe skill s and the equipment to build most anything in wood. He was impressed by Captain Clarence&#39;s half model, and he came to terms with Williams to start construction. Precisely w h at was agreed to fin ancially is lost ro time, but presumably the price was likely similar to th at ch arged by Captain John B. for j ay Dee-$1,200, spars included . Rem ember, these were rhe days of the Grear D epression. The boat construction at Oxford was a great puzzlement, with much rumor, much conjecture, and little fact. Williams apparently enjoyed the talk and speculation and concluded that an appropriate name for his newest project would be Mystery. Completed in 1932, she turned our to be SEA HISTORY 154, SPRING 20 16

(l-r) M agic, Flying C lo ud, Mystery and Jay Dee, circa early to mid- J930s. All are still actively raced in these same waters today. a good boat, fully competitive with fay Dee and Flying Cloud, but ultimately perhaps not quite as successful. Capta in D obson contended that &quot;with f ay Dee&#39;s rig in her&quot; she was the fastest of the three. Captain Buck was as ked his opinion of the big trio and said, &quot;I always liked j ay Dee.&quot; In any case, John Williams&#39;s pursuit of the Governor&#39;s C up was never successful, although Mystery did win the big trophy many yea rs later, in 1962, under different ownership j ay Dee, Flying Cloud, and Mystery were each larger, better equipped, and generally faster than the rest of the fl ee t&quot;goldplaters,&quot; if yo u will. The goldplaters continued inro the &#39;30s, racing a mong themselves and against the old traditional canoes, large cruising boats, a nd the remarkable new boat, Noddy, built in 1932 by Oliver Duke. While the big three captured the public&#39;s attention in the 1930-40s era, their presence was not embraced with enthusiasm by the owners of the older canoes. Many felt that the new boars were intruders, that the slick new hulls with their fancy sails and professional uniformed crews were just too much, a nd the handicap system was unfair in that it failed to rake into account that these new beamy, deep hulls could carry much more sai l than the traditional ca noes could m anage. The handicap calcu lation was a si mple one, and had been in effect well before the turn of the century. Each canoe was m easured for length on deck, from the inside of rhe srem post to the outside of the sternposr. This measurement gave rhe boar irs

rating. The handicap provided a time allowance between canoes of &quot;six seconds per foot per mile of the course.&quot; This meant, for example, that a thirty-foo t ca noe had to allow a twemy-eighr-foor boat twelve seconds for each mile of the course, or 120 seconds total for a ten-mile race. Thar system seemed to be equitable in practice so long as rhe hulls were all, roughly, of the same type. Bur the thirty-five foot Flying Cloud, for example, could ca rry perhaps a third more sail than the thirty-four foot Magic, and only have to give up a modest time allowance to the much smaller-rigged boar. A new handicap calculation was proposed based upon nor one, bur three hull m eas urements: length on deck stem ro stern, plus maximum beam , plus &quot;after qu arter beam,&quot; i.e., beam m easured at a point half way between the after (&quot;main&quot;) m as t and the srernposr. This new system was adopted by som e race sponsors a nd rejected by others. Naturally, the owners of rhe older boars favored it, while the afrerguards of the new boars were nor impressed . Perhaps it was just as well that World War II intervened before rhe controversy got really nasty. 1he global conflagration put the brakes on raci ng of every so rr- boats, planes and automobiles. After rhe wa r, both John Williams and Johnson Grymes decided rhar their racing days were over, and so the three goldplarers were put on the m arker. There was a new day coming and many new log canoe chapters to be written. For reasons known only to him, John Williams decided to advertise Jay Dee for