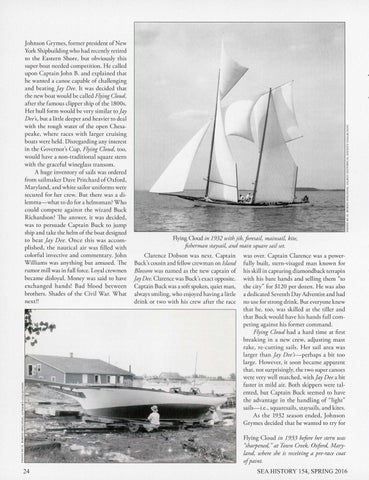 Johnson G rymes, former president of New York Shipbuilding who had recently retired to the Eastern Shore, bur obviously this super boat needed competition. He called upon Captain John B. and explained that he wanted a canoe capable of challenging and beating Jay Dee. Ir was decided that the new boat would be called Flying Cloud, after the famo us clipper ship of the 1800s. H er hull form would be very similar to jay Dee's, bur a little deeper and heavier to deal with the rough water of the open C hesap eake, where races with larger cruising boars were held. Disregarding any interest in the Governor's C up, Flying Cloud, too, would have a non-traditional square stern with the graceful wineglass transom . A huge inventory of sails was ordered from sailmaker Dave Pritchard of Oxford, Maryland, and white sailor uniforms were secured for her crew. But there was a dilemma-what to do for a helmsman ? Who could compete against the wizard Buck Richardson ? The answer, it was decided, was to persuade Captain Buck to jump ship and take the helm of the boat designed to bea t jay Dee. Once this was acco mplish ed , the nautical air was filled with colorful invective and commentary. John Williams was anything but amused . The rumor mill was in full fo rce. Loyal crewmen became disloyal. Money was said to have exch anged h ands! Bad blood between bro thers. Shades of the Civil War. What nex t?!

I Flying Cloud in 1932 with jib, foresail, mainsail, kite,

fisherman staysail, and main square sail set. C larence Dobson was next. Captain Buck's cousin and fellow crewman on Island Blossom was named as the new captain of j ay Dee. Clarence was Buck's exact opposite. Captain Buck was a soft spoken, quiet man, always smiling, who enjoyed having a little drink or two with his crew after the race

was over. Captain Clarence was a powerfully built, stern-visaged man known for his skill in capturing diamondback terrapin with his bare hands and selling them "to the city" for $120 per dozen. H e was also a dedicated Seventh Day Adventist and had no use for strong drink. But everyone knew that he, too, was skilled at the tiller and that Buck wo uld have his hands full competing against his former com mand. Flying Cloud had a hard time at first breaking in a new crew, adjusting mast rake, re-cutting sails. H er sail area was larger than Jay Dees-perhaps a bit too large. However, it soon became apparent that, not surprisingly, the two super canoes were very well matched, with j ay Dee a bit faste r in mild air. Both skippers were talented, but Captain Buck seemed ro have the advantage in the handling of "light" sails-i.e., squaresails, staysails, and kites. As the 1932 season ended, Johnson Grymes decided that he wanted to try for Flying C loud in 1933 before her stern was

''sharpened, "at Town Creek, Oxford, Maryland, where she is receiving a pre-race coat ofpaint. 24