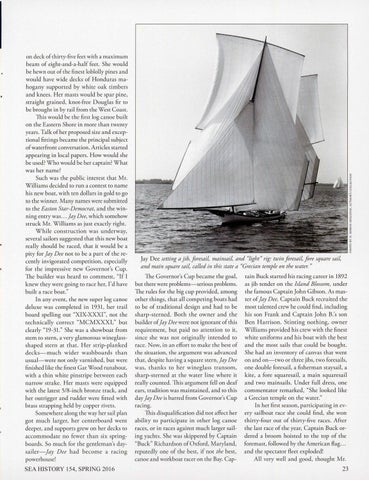 on deck of thirty-fi ve feet with a maximum beam of eight-and-a-half feet. She would be hewn out of the finest loblolly pines and would have wide decks of Honduras mahogany supported by white oak timbers and knees. H er mas ts wo uld be spar pine, straight grained, knot-free Douglas fir to be brought in by rail from the West Coast. This would be the fi rs t log canoe built on the Eastern Shore in more than twe nty years. Talk of her proposed size and exceptional fittings became the principal subj ect of waterfront conversation. Articles started appearing in local papers. How would she be used ? Who would be her captain? What was her name? Such was the public interest that Mr. W illiams decided to run a contest to name his new boat, with ten dollars in gold to go to the winner. Many names were submitted to the Easton Star-Democrat, and the winning entry was . .. Jay D ee, which somehow struck Mr. W illiams as just exactly right. W hile con struction was underway, several sa ilors sugges ted that this new boat really should be raced, that it wo uld be a pity for j ay D ee not to be a part of the recently invigorated competition, especially fo r the impressive new G overnor's C up. The builder was heard to comment, "If I knew they were going to race her, I'd have built a race boat." In any event, the new super log canoe deluxe was completed in 193 1, h er trail board spelling out "XIX-XXXI'', not the technically correct "MCMXXXI," but clearly "19-31." She was a showboat from stem to stern, a very glamorous wineglasssh aped stern at that. H er strip-planked decks -much wider was hboa rds than usual-were not only varnished, but were finished like the finest Gar Wood runabo ut, with a thin white pinstripe between each na rrow strake. H er m asts were equipped with the latest 5/8-inch bronze track, and her outrigger and rudder were fitted with brass strapping held by copper ri ve ts. Somewhere along the way her sail plan got much larger, h er centerboard went deeper, and supports grew on her decks to accommodate no fewer th an six springboards. So much fo r the gentleman's daysailer-] ay D ee h ad become a raci n g powerhouse!

Jay Dee setting a jib, foresail, mainsail, and "light" rig: twin foresail, fore square sail, and main square sail, called in this state a "Grecian temple on the water. " The G overnor's C up became the goal, but there were problems- serious problems. The rules for the big cup provided , among other things, that all competi ng boats had to be of traditional design and h ad to be sh arp-sterned . Both th e owner and the builder ofj ay D ee were not ignorant of this requirement, but paid no attention to it, since she was not originally intended to race. N ow, in an effort to m ake the best of the situation, the argument was adva nced that, despite having a square stern, j ay D ee was, thanks to her wi neglass tran som , sh arp-sterned at the wa ter li ne where it really counted . This argument fell on deaf ears, tradition was maintained, and to this day Jay D ee is barred fro m Governor's C up raci ng. This disqualification did no t affect her ability to p articipate in other log canoe races, or in races against much larger sailing yachts. She was skippered by Captain "Buck" Richardson of Oxford, M aryland, reputedly one of the best, if not the best, canoe and workboat racer on the Bay. Cap-

rain Buck started his racing career in 1892 as jib tender on the Island Blossom, under the famous C aptain John G ibson. As master of j ay D ee, Captain Buck recruited the most talented crew he could find, including his son Fran k and Captain John B.'s son Ben H arrison. Stinting nothing, owner W illiams provided his crew with the finest white uniforms and his boat with the best and the most sails that could be bought. She had an inventory of canvas that went on and on-two or three jibs, two foresails, one double fo resail, a fisherman staysail, a kite, a fo re squaresail, a m ain squaresail and two mainsails. Under full dress, one commentator remarked, "She looked like a Grecian tem ple on the water." In her fi rs t season, participating in every sailboat race she could find, she won thirty-fo ur out of thirty-five races. After the las t race of the year, Captai n Buck ordered a broom hoisted to the top of the fo remast, fo llowed by the A merican fl ag ... and the spectator fleet exploded! All very well and good, thought Mr. 23