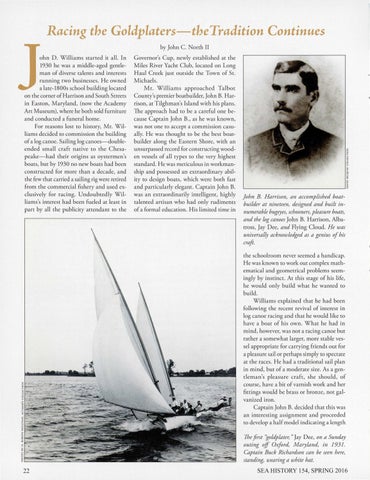 Racing the Goldplaters-theTradition Continues by John C. No rth II ohn D. William s starred it all. In 193 0 he was a middle-aged gentleman of dive rse talents and interes ts running two businesses. H e owned a late-1 800s school building located on the corner of H arrison and South Streets in Easton, Maryland, (now the Academy Art M useum), where he both sold furniture and conducted a funeral home. For reasons lost to history, M r. W illiams decided to commission the building of a log canoe. Sailing log canoes-doubleended sm all craft native to the C hesapeake-had their origins as oys termen&#39;s boats, but by 1930 no new boats had been constructed for mo re than a decade, and the few that carried a sailing rig were retired from the commercial fishery and used exclusively for racing. Undo ubtedly William s&#39;s interest had been fueled at least in part by all the publicity attendant to the

Governor&#39;s C up, newly esrablished at the Miles River Yacht Club, located on Long Haul Creek just outside the Town of St. Michaels. Mr. William s appro ac hed Talbot County&#39;s premier boatbuilder, John B. H arrison, at Tilghman&#39;s Island with his plans. The approach had to be a careful one because Captain John B., as he was known, was not one to accept a commission casually. H e was thought to be the best boatbuilder along the Eastern Shore, with an unsurpassed record fo r constructing wooden vessels of all types to the very highest standard. H e was meticulous in wo rkmanship and possessed an extraordinary ability to design boars, which we re both fas t and particularly elegant. Captain John B. was an extraordinarily intelligent, highly talented artisan who had only rudiments of a formal education. His limited time in

j ohn B. Harrison, an accomplished boatbuilder at nineteen, desigrted and built innumerable bugeyes, schooners, pleasure boats, and the log canoes John B. H arrison, Albatross, Jay D ee, and Flying Cloud. He was universally acknowledged as a genius of his craft. the schoolroom never seemed a handicap. H e was known to work out complex mathematical and geometrica l problem s seemingly by instinct. Ar this stage of his life, he wo uld only build what he wa nted to build. W illiams explained that he had been following the recent revival of interes t in log canoe racing and that he would like to have a boar of his own. What he had in mind, however, was not a racing canoe but rather a somewhat larger, more stable vessel appropriate fo r carrying friends out fo r a pleasure sail or perhaps simply to spectate at the races. H e had a traditional sail plan in mind, bur of a moderate size. As a gentlem an&#39;s pleasure craft , she should, of course, have a bit of va rnish work and her fittin gs would be brass or bronze, not galvanized iron . Captain John B. decided that this was an interesting assignment and proceeded to develop a half model indicating a length

1he first &quot;goldplater, &quot;Jay D ee, on a Sunday outing off Oxford, Maryland, in 193 1. Captain Buck Richardson can be seen here, standing, wearing a white hat. 22