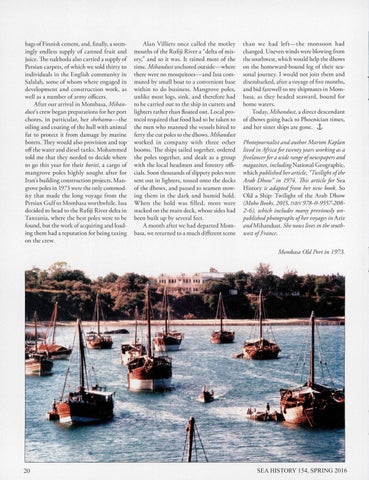 bags of Finnish cement, and, finally, a seemingly endless supply of canned fruit and juice. The nakhoda also carried a supply of Persian carpets, of which we sold thirty to individuals in the English community in Salalah, some of whom where engaged in development and construction work, as well as a number of army officers. After our arrival in Mombasa, Mihandust's crew began preparations for her port chores, in particular, her shehamu-the oiling and coating of the hull with animal fat to protect it from damage by marine borers. They would also provision and top off the water and diesel tanks. Mohammed told me that they needed to decide where to go this year for their boriti, a cargo of mangrove poles highly sought after for Iran's building construction projects. Mangrove poles in 1973 were the only commodity that made the long voyage from the Persian Gulf to Mombasa worthwhile. Issa decided to head to the Rufiji River delta in Tanzania, where the best poles were to be found, but the work of acquiring and loading them had a reputation for being taxing on the crew.

Alan Villiers once called the motl ey mouths of the Rufiji River a "delta of misery," and so it was. It rained most of the time. Mihandust anchored outside-where there were no mosquitoes-a nd Issa commuted by small boat to a convenient base within to do business. Mangrove pol es, unlike most logs, sink, and therefore h ad to be carried out to the ship in cutters and lighters rather than Boated out. Local protocol required that food had to be taken to the men who manned the vessels hired to ferry the cut poles to the dhows. Mihandust worked in company with three other booms. The ships sailed together, ordered the poles together, and dealt as a group with the local headmen and forestry officials. Soon thousands of slippery poles were sent out in lighters, tossed onto the decks of the dhows, and passed to seamen stowing them in the dark a nd humid hold. When th e hold was filled, more were stacked on the main deck, whose sides had been built up by severa l feet. A month after we had departed Mombasa, we returned to a much different scene

th a n we h ad left-th e monsoon had changed. Uneven winds were blowing from the southwes t, which would help the dhows on the homeward-bound leg of their seasonal journey. I would not join them and disembarked, after a voyage of five months, and bid farewell to my shipmates in Mombasa, as they headed seaward , bound for home waters. Today, Mihandust, a direct descendant of dhows going back to Phoenician times, and her sister ships are gone. ,!,

Photojournalist and author Marion Kaplan lived in Africa for twenty years working as a freelancer for a wide range ofnewspapers and magazines, including National Geographic, which published her article, "Twilight ofthe Arab Dhow" in 1974. This article for Sea History is adapted from her new book, So Old a Ship: Twilight of the Arab Dhow