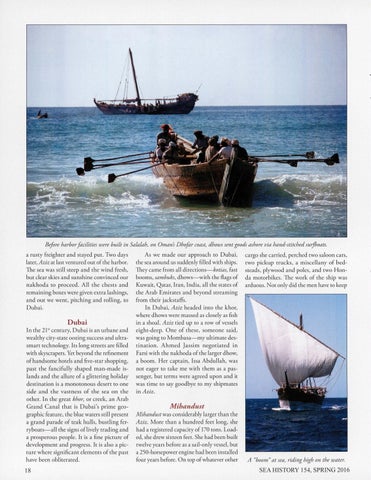 Before harbor facilities were built in Salalah, on Oman's Dhofar coast, dhows sent goods ashore via hand-stitched surjboats. a rusty freighter and stayed put. Two days later, Aziz at last ventured out of the harbor. The sea was still steep and the wind fresh, but clear skies and sunshine convinced our nakhoda to proceed. All the chests and remaining boxes were given extra lashings, and out we went, pitching and rolling, to Dubai.

Dubai In the 21 " century, Dubai is an urbane and wealthy city-state oozing success and ultrasmart technology. Its long streets are filled with skyscrapers. Yet beyond the refinement of handsome hotels and five-star shopping, pas t the fancifully shaped man-made islands and the allure of a glittering holiday destination is a monotonous desert to one side and the vastness of the sea on the other. In the great khor, or creek, an Arab Grand Canal that is Dubai 's prime geographic feature, the blue waters still present a grand parade of teak hulls, bustling ferryboats-all the signs oflively trading and a prosperous people. It is a fine picture of development and progress. It is also a picture where significant elements of the pas t h ave been obliterated.

As we made our approach to Dubai, the sea around us suddenly filled with ships. They came from all directions-kotias, fast booms, sambuks, dhows-with the flags of Kuwait, Qatar, Iran, India, all the states of the Arab Emirates and beyond streaming from their jackstaffs. In Dubai, Aziz headed into the khor, where dhows were massed as closely as fish in a shoal. Aziz tied up to a row of vessels eight-deep. One of these, someone said, was going to Mombasa-my ultimate destination. Ahmed Jassim negotiated in Farsi with the nakhoda of the larger dhow, a boom. Her captain, Issa Abdullah, was not eager to take me with them as a passenger, but terms were agreed upon and it was time to say goodbye to my shipmates in Aziz.

cargo she carried , perched two saloon cars, two pickup trucks, a miscellany of bedsteads, plywood and poles, and two Honda motorbikes. The work of the ship was arduous. Not only did the men have to keep

Mihandust Mihandustwas considerably larger than the Aziz. More than a hundred feet long, she had a registered capacity of 170 tons. Loaded, she drew sixteen feet. She had been built twelve years before as a sail-only vessel, but a 250-horsepower engine had been installed four years before. On top of whatever other