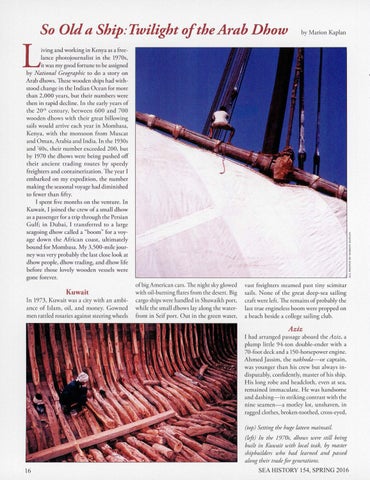 iving and working in Kenya as a freelance photojournalist in the 1970s, it was my good fo rtune to be assigned by National Geographic to do a story on Arab dhows. These wooden ships had withstood change in the Indian Ocean for more than 2,000 years, bu t their numbers were then in rapid decline. In the early yea rs of the 20&#39;h century, betwee n 600 and 700 wooden dhows with their great billowing sails would arrive each year in M ombasa, Kenya, with the monsoon from Muscat and Oman, A rabia and India. In the 193 0s and &#39;40s, their number exceeded 200, but by 1970 the dhows were being pushed off t heir ancie nt trading ro utes by speedy freighters and containerization. Th e year I embarked on my expedition, the number making the seasonal voyage had diminished to fewer than fifry. I spent five months on the venture. In Kuwait, I joined the crew of a small dhow as a passenger fo r a trip th rough the Persian G ulf; in Dubai, I transferred to a large seagoing dhow called a &quot;boom&quot; fo r a voyage down the African coast, ultimately bound for Mombasa. My 3,500-mile journey was very probably the las t close look at dhow people, dhow trading, and dhow life before those lovely wooden vessels were gone forever.

Kuwait In 1973, Kuwait was a city with an ambiance of Islam, oil, and money. G owned men rattled rosaries against steering wheels

of big American cars. The night sky glowed with oil-burning flares from the desert. Big cargo ships were handled in Shuwaikh port, while the small dhows lay along the waterfront in Seif port. Out in the green water,

vast fre ighters steamed pas t tiny scimitar sa ils. None of the great deep -sea sailing craft were left. The remains of probably the las t true engineless boom were propped on a beach beside a college sailing club.

Aziz I had arra nged passage aboard the Aziz, a plump little 94-ton double-ender w ith a 70-foot deck and a 150-horsepower engine. Ahmed Jassim, the nakhoda- or captain, was yo unger than his crew but always indisputably, confidently, master of his ship. His long ro be and headcloth, even at sea, rem ained immaculate. H e was handsome and dashing-in striking contrast with the nine seamen-a motley lot, unsh aven, in ragged clothes, broken-toothed, cross-eyed,

(top) Setting the huge lateen mainsail. (left) In the 1970s, dhows were still being built in Kuwait with local teak, by master shipbuilders who had learned and passed along their trade for generations.