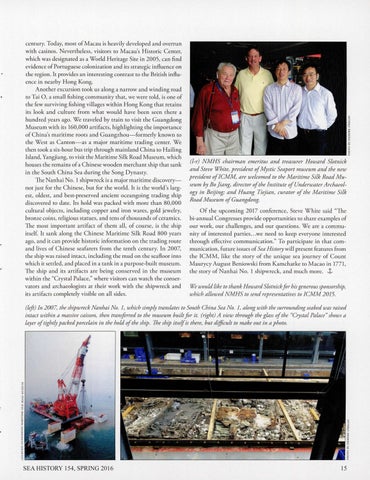 century. Today, most of Macau is heavily developed and overrun with casinos. Nevertheless, visitors to M acau's Historic C enter, which was designated as a World H eritage Site in 2005, can find evidence of Portuguese colonization and its strategic influence on the region. It provides an interesting contras t to the British influence in nearby H ong Kong. Another excursion took us alo ng a narrow and winding road to Tai 0 , a sm all fishing community that, we were told, is one of the few surviving fi shing villages within Hong Kong that retains its look and culture from what wo uld h ave been seen there a hundred years ago. We traveled by train to visit the Guangdong Museum with its 160,000 artifacts, highlighting the importance of C hina's m aritime roots and G uangzhou- formerly known to the W est as Canton-as a majo r m a ritime trading center. W e then took a six-hour bus trip through m ainland C hina to H ailing Island, Yangjiang, to visit the M ari time Silk Road Museum, which houses the rem ains of a Chinese wooden merchant ship that sank in the South China Sea during the Song D ynasty. The N anhai No. 1 shipwreck is a major maritime discoverynot just for the Chinese, but for the world. It is the world 's largest, oldest, and best-preserved ancient oceangoing trading ship di scovered to date. Its hold was packed w ith more than 80,000 cultural objects, including copper and iron wares, gold jewelry, bronze coins, religious statues, and tens of thousands of ceramics. The most important arti fac t of them all, of course, is the ship itself. It sank along the C hinese Maritime Silk Road 800 yea rs ago, and it can provide historic information on the trading route and lives of Chinese seafarers from the tenth century. In 2007, the ship was raised intact, including the mud on the seafloor into which it settled, and placed in a tank in a purpose-built museum. The ship and its artifac ts are being conserved in the museum within the "Crys tal Palace," where visitors can watch the conservators and archaeologists at their work with the shipwreck and its artifacts completely visible on all sides.

(l-r) NMH S chairman emeritus and treasurer H oward Slotnick and Steve White, president ofMystic Seaport museum and the new president of ICMM, are welcomed to the Maritime Silk Road Mu seum by Bo Jiang, director ofthe Institute of Underwater Archaeology in Beijing; and H uang Tiejian, curator of the Maritime Silk Road Museum of Guangdong. Of the upcoming 201 7 conference, Steve White said "The bi-a nnual Congresses provide opportunities to sh are examples of our work, our challenges, and our questions. We are a community of interested parties . .. we need to keep everyone interested through effective communication." To participate in that communication, future issues of Sea H istory will present fea tures from the ICMM, like the story of the unique sea journey of C ount Maurycy August Beniowski from Kamchatke to Macao in 177 1, the story of Nanhai No. 1 shipwreck, and much more. !, We would like to thank Howard Slotnick for his generous sponsorship, which allowed NMHS to send representatives to I CMM 2 015.

(left) In 2 007, the ship wreck Nanhai No. 1, which simply translates to South China Sea No. 1, along with the surrounding seabed was raised intact within a massive caisson, then transferred to the museum built fo r it. (right) A view through the glass of the "Crystal Palace" shows a layer oftightly packed p orcelain in the hold of the ship. The ship itselfis there, but difficult to make out in a p hoto.