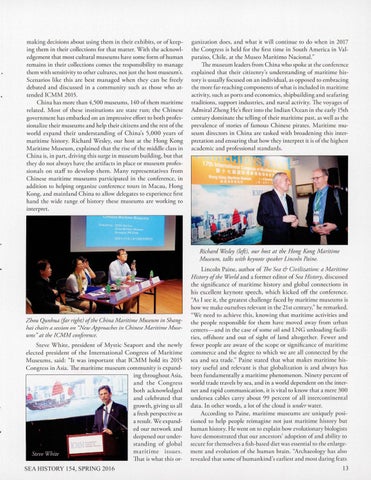 making decisions abour using them in their exhibits, or of keeping them in their collections for that matter. With the acknowledgement that most cultural museums have so me form of human remains in their collections comes the responsibility to m anage them with sensitivity to other cultures, not just the host museum's. Scenarios like this are best managed when they can be freely debated and discussed in a community such as those who attended ICMM 2015 . China has more than 4,500 museums, 140 of them m aritime related . Most of these institutions are state run ; the C hinese government has embarked on an impressive effort to both professionalize their museums and help their citizens and the rest of the world expand their understanding of C hina's 5, 000 yea rs of m aritime history. Richard Wesley, our host at the Hong Kong Maritime Museum, explained that the rise of the middle class in China is, in part, driving this surge in museum building, but that they do not always have. the artifacts in place or museum professionals on staff to develop them. Many representa tives from C hinese maritime museums participated in the conference, in additio n to helping organize conference tours in Macau, Hong Kong, and mainland China to allow delegates to experience first hand the wide range of history these museums are wo rking to interpret.

gan ization does, and wh at it will continue to do when in 2017 the Congress is held for the first time in South America in Valparaiso, C hile, at the Museo Maritimo Nacional." The museum leaders from China who spoke at the conference explained that their citizenry's understanding of m aritime history is usually focused on an individual, as opposed to embraci ng the more far-reaching components of what is included in maritime activity, such as ports and economics, shipbuilding and seafaring traditions, support industries, and naval activity. The voyages of Admiral Z heng He's fleet into the Indian Ocean in the early 15th century dominate the telling of their maritime past, as well as the prevalence of stories of famous Chinese pirates. Maritime museum directors in Ch ina are tasked with broadening this interpretation and ensuring that how they interpret it is of the highest academic and professional standards.

Zhou Qunhua (far right) ofthe China Maritime Museum in Shanghai chairs a session on "New Approaches in Chinese Ma ritime Museums" at the I CMM conference. Steve White, president of M ys tic Seaport and the newly elected president of the International Congress of Maritime Museums, said: "It was importa nt that ICMM hold its 2015 Congress in Asia. The maritime museum community is expanding throughout Asia, and the Congress both acknowledged a nd celebrated that growth, giving us all a fresh perspective as a result. We expanded our network and deepened our understanding of global manume iss u es. That is what this or-

Lincoln Paine, author of The Sea & Civilization: a Maritime H istory ofthe World and a form er editor of Sea H istory, discussed the significa nce of maritime history and global connections in his excellent keynote speech, which kicked off the conference. "As I see it, the greatest challenge faced by maritime m useums is how we make ourselves releva nt in the 21st century," he rem arked. "We need to achieve this, knowing that m aritime activities and the people responsible for them have moved away from urban centers-and in the case of some oil and LNG unloading faci liti es, offshore a nd out of sight of la nd altogether. Fewer and fewer people are aware of the scope or significance of m aritime commerce and the degree to w hich we are all connected by the sea a nd sea trade." Paine stated that what m akes m a ritime history useful and relevant is that globali zation is and always has been fund amentally a maritime phenomenon. N inety percent of wo rld trade travels by sea, and in a world dependent on the internet and rapid communication, it is vital to know that a mere 300 undersea cables carry abour 99 percent of all intercontinental data. In other words, a lot of the cloud is under wa ter. According to Paine, maritime museums are uniquely positioned to help people reimagine not just maritime history but human history. He went on to explain how evolutionary biologists have demonstrated that our ancestors' adoption of and ability to secure for themselves a fish-based diet was essential to the enlargement and evolution of the huma n brain. ''Archaeology has also revealed that som e of humankind 's earliest and most daring feats 13