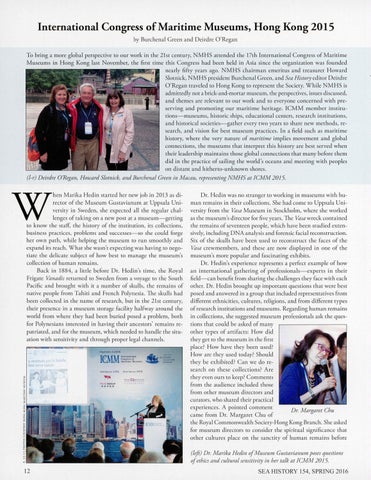 International Congress of Maritime Museums, Hong Kong 2015 by Burchenal Green and Deirdre O'Regan To bring a more global perspective to o ur work in the 21st century, NMHS attended the 17th International Congress of Maritime Museums in H ong Kong last November, the first time this Congress had been held in Asia since the organization was fo unded nearly fifty years ago. NMHS ch airma n emeritus and treasurer Howard Slotnick, NMHS president Burchenal Green, and Sea History editor Deirdre O'Regan traveled to Hong Kong to represent the Society. While NMHS is admittedly not a brick-and-mortar museum, the perspecti ves, issues discussed, and themes are relevant to our work and to everyone co ncerned with preserving and promoting our maritime heritage. ICMM member institutions-museums, historic ships, educational centers, research institutions, and historical societies-gather every two years to share new methods, research, and vision for best museum practices. In a field such as maritime history, where the very nature of maritime implies movement and global connections, the museums that interpret this history are best served when their leadership maintains those global connections that many before them did in the practice of sailing the wo rld 's oceans and meeting with peoples on distant and hitherto-unknown shores. (l-r) Deirdre O'Regan, Howard Slotnick, and Burchenal Green in Macau, representing NMHS at ICMM 2015.

hen Marika Hedin started her new job in 2013 as director of the Museum G ustavianum at Uppsala University in Sweden, she expected all the regular challenges of taking on a new post at a museum-getting to know the staff, the history of the institution, its collections, business practices, problems and successes-so she could forge her own path, while helping the museum to run smoothly and expand its reach. W h at she wasn't expecting was having to negotiate the delicate subject of how best to manage the museum's collection of human remains. Back in 1884, a little before Dr. Hedin's time, the Royal Frigate Vanadis returned to Sweden from a voyage to the South Pacific and brought with it a number of skulls, the remains of native people from Tahiti and French Polynesia. The skulls had been collected in the name of research, but in the 21st century, their presence in a museum storage facility halfway aro und the world from where they had been buried posed a problem, both for Polynesians interested in having their ancestors' remains repatriated, and for the museum, which needed to handle the situation wit h sensitivity and through proper legal channels.

Dr. Hedin was no stranger to working in museums with human remains in their collections. She had come to Uppsala University from the Vasa Museum in Stockholm, where she worked as the museum's director for five years. The Vasa wreck contained the remains of seventeen people, which have been studied extensively, including DNA analysis and forensic facial reconstruction. Six of the skulls have been used to reconstruct the faces of the Vasa crewmembers, and these are now displayed in one of the museum's more popular and fascinat ing exhib its. Dr. Hedin's experience represents a perfect example of how an international gathering of professionals-experts in their field-can benefit from sharing the challenges they face with each other. Dr. Hedin brought up important questions that were best posed and answered in a gro up that included representatives from different ethnicities, cultures, religions, and from different types of research institutions and museums. Regarding human remains in collections, she suggested museum professionals ask the questions that could be asked of many other types of artifacts: How did they get to the museum in the first place? How have they been used? How are they used today? Should they be exhibited? Can we do research on these collections? Are they even ours to keep? Comments from the audience included those from other museum direcrors and curators, who shared their practical experiences. A pointed comment Dr. Margaret Chu came from Dr. Margaret Chu of the Royal Commonwealth Society-Hong Kong Branch. She asked for museum directors to consider the spiritual significance that other cultures place on the sanctity of human remains before (left) Dr. Marika Hedin ofMuseum Gustavianum poses questions ofethics and cultural sensitivity in her talk at ICMM 2015.