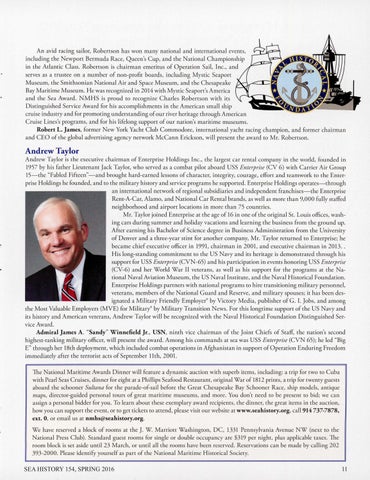 An avid racing sailor, Robertson has won many national and international events, including the Newport Bermuda Race, Queen's C up, and the National C hampionship in the Atlantic Class. Robertson is chairman emeritus of Operation Sail, Inc. , and serves as a trustee on a number of non-profit boards, including Mystic Seaport M useum, the Smithsonian National Air and Space Museum, and the Chesapeake Bay Maritime M useum. He was recognized in 2014 with Mystic Seaport's America and the Sea Award. NMHS is proud to recognize C harles Robertson with its Distinguished Service Award for his accomplishments in the American small ship cruise industry and for promoting understanding of our river heritage through American Cruise Lines's programs, and for his lifelong support of our nation's maritime museums . Robert L. James, former New York Yacht C lub Commodore, international yacht racing champion, and former chairman and CEO of the global advertising agency network McCann Erickson, will present the award to Mr. Robertson.

Andrew Taylor Andrew Taylor is the executive chairman of Enterprise Holdings Inc. , the largest car rental company in the world, founded in 1957 by his father Lieutenant Jack Taylor, who served as a combat pilot aboard USS Enterprise (CV 6) with Carrier Air Group 15-the "Fabled Fifteen"-and brought hard-earned lessons of character, integrity, courage, effort and teamwork to the Enterprise Holdings he founded, and to the military history and service programs he supported. Enterprise Holdings operates-through an international network of regional subsidiaries and independent franchises-the Enterprise Rent-A-Car, Alamo, a nd National Car Rental brands, as well as more than 9,000 fully staffed neighborhood and airport locations in more than 75 countries. Mr. Taylor joined Enterprise at the age of 16 in one of the original St. Louis offices, washing cars during summer and holiday vacations and learning the business from the ground up. After earning his Bachelor of Science degree in Business Administration from the University of Denver and a three-year stint for another company, Mr. Taylor returned to Enterprise; he became chief executive officer in 1991, chairman in 2001, and executive chairman in 2013 . . His long-standing commitment to the US Navy and its heritage is demonstrated through his support for USS Enterprise (CVN-65) and his participation in events honoring USS Enterprise (CV-6) and her World War II veterans, as well as his support for the programs at the National Naval Aviation Museum, the US Naval Institute, and the Naval Historical Foundation. Enterprise Holdings partners with national programs to hire transitioning military personnel, veterans, members of the National Guard and Reserve, and military spouses; it has been designated a Military Friendly Employer" by Victory Media, publisher of G. I. Jobs, and among the Most Valuable Employers (MVE) for Military" by Military Transition News. For this longtime support of the US Navy and its history and American veterans, Andrew Taylor will be recognized with the Naval Historical Foundation Distinguished Service Award. Admiral James A. "Sandy" Winnefield Jr., USN, ninth vice chairman of the Joint Chiefs of Staff, the nation's second highest-ranking military officer, will present the award. Among his commands at sea was USS Enterprise (CVN 65); he led "Big E" through her 18th deployment, which included combat operations in Afghanistan in support of Operation Enduring Freedom immediately after the terrorist acts of September 11th, 2001. The National Maritime Awards Dinner will feature a dynamic auction with superb items, including: a trip for two to Cuba with Pearl Seas Cruises, dinner for eight at a Phillips Seafood Restaurant, original War of 1812 prints, a trip for twenty guests aboard the schooner Sultana for the parade-of-sail before the Great Chesapeake Bay Schooner Race, ship models, antique maps, director-guided personal tours of great maritime museums, and more. You don't need to be present to bid; we can assign a personal bidder for yo u. To learn about these exemplary award recipients, the dinner, the great items in the auction, how you can support the event, or to get tickets to attend, please visit our website at www.seahistory.org, call 914 737-7878, ext. 0, or emai l us at nmhs@seahistory.org. We have reserved a block of rooms at the J. W. Marriott Washington, D C, 1331 Pennsylvania Avenue NW (next to the National Press C lub). Standard guest rooms for single or double occupancy are $319 per night, plus applicable taxes. The room block is set aside until 23 March, or until all the rooms have been reserved. Reservations can be made by calling 202 393-2000. Please identify yourself as part of the National Maritime Historical Society.