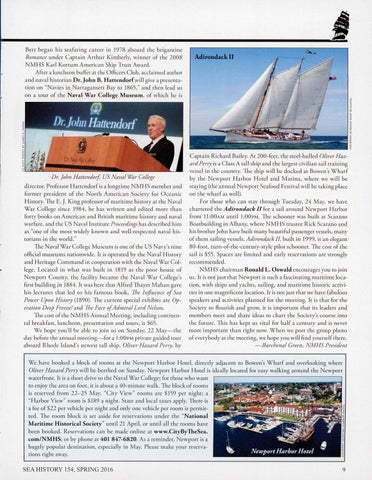 Bert began his seafari ng career in 1978 aboard the brigantine Romance under Captain Arthur Kimberly, winner of the 2008 NMHS Karl Kortum American Ship Trust Award . After a luncheon buffer at the Officers C lub, acclaimed author and naval historian Dr. John B. Hattendorf will give a presentation on &quot;Navies in Na rragansett Bay to 1865,&quot; a nd then lead us on a tour of the Naval War College Museum, of which he is

D r. john Hattendorf, US Naval W0r College director. Professor H attendorfis a longtime NMHS member and former president of the North American Society for Oceanic History. The E. J. King professor of maritime h istory at the Naval War College since 1984, he has written and edited more tha n forty books on American and British m aritime history and naval warfare, and the US Naval Institute Proceedings has descri bed him as &quot;o ne of the most widely known and well-respected naval h istorians in the world.&quot; The Naval War College Museum is one of the US Navy&#39;s nine official museums nationwide. It is operated by the Naval History a nd Heritage Command in cooperation with the Naval War College. Located in wh at was built in 1819 as the poo r house of Newport County, the facility became the Naval War College&#39;s first building in 1884. Ir was here that A lfred Thayer Mahan gave hi s lectures that led to his famous book, The Influence of Sea Power Upon H istory (1890). The current special exhibits are Operation D eep Freeze! and The Face ofAdmiral Lord Nelson . The cost of the NMHS Annual Meeting, including conti nenral breakfast, luncheon, presentation and tours, is $65. We hope you&#39;ll be able to join us on Sunday, 22 May-the day before the annual meeting-for a 1:00PM private guided tour aboard Rhode Island &#39;s newest rail ship, Oliver Haz ard Perry, by

Captain Richard Bailey. At 200-feer, the steel-hulled Oliver Hazard Perry is a C lass A rail ship a nd the largest civilian sail training vessel in the country. The ship wi ll be docked at Bowen&#39;s W harf by the Newport Harbor Hotel and Marina, where we will be stayin g (the annual Newport Seafood Festival wi ll be raking place on the wharf as well). For those who can stay through Tuesday, 24 May, we have chartered the Adirondack II for a sail around Newport Harbor from 11:00AM until l:OOPM. The schooner was built at Scarano Boatbuilding in A lba ny, where NMHS trustee R ick Scarano and his brother John have built many beautiful passenger vessels, many of them sailing vessels. Adirondack JI, built in 1999, is an elegant 80-foor, turn-of-the-century-s tyle pilot schooner. 1he cost of the sail is $55. Spaces are limited and early reservations are strongly recommended. NMHS chairman Ronald L. Oswald encourages yo u to join us. Ir is not just that Newport is such a fascinati n g m aritime location, with ships and yachts, sailing, and maritime historic activities in one magnifi cent location . Ir is not just that we have fabu lous speakers and activities planned for the m eeting. Ir is that for the Society to flourish and grow, it is important that its leaders and members m eet and sh are ideas to ch art the Society&#39;s course into the future. This has kept us viral for half a century and is never more importa nt than right now. When we post the group photo of everybody at the m eeting, we hope you will find yourself there. - Burchenal Green, NMHS President

We have booked a block of rooms at the Newport Harbor Hotel, directly adjacent to Bowen&#39;s Wharf a nd overlooking where Oliver Hazard Perry will be berthed on Sunday. Newport H a rbor Hotel is ideally located for easy walking aro und the Newport waterfront. It is a short drive to the Naval War College; for those who want to enj oy the area on foot, it is about a 40-minute walk. The block of rooms is reserved from 22-25 M ay. &quot;City View&quot; rooms a re $ 159 per night; a &quot;Harbor View&quot; room is $ 189 a night. State and loca l taxes apply. There is a fee of $22 per vehicle per night and only one vehicle per room is permitted. The room block is set aside for reservation s under the &quot;National Maritime Historical Society&quot; until 21 April, or until all the rooms have been booked. Reservations can be made online at www.CityByTheSea. com/NMHS; or by phone at 401 847-6820. As a reminder, Newport is a hugely popula r destination, especially in May. Please make yo ur reservations right away.