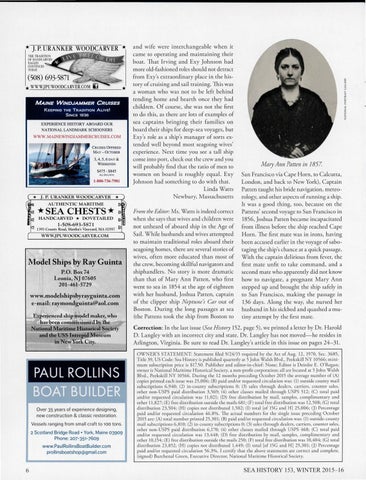 a nd wife were intercha n geable wh en it came to operati ng and m aintaining their boat. That Irving and Exy Johnson had more old-fashioned roles should not detract fro m Exy's extraordinary place in the history of cruising a nd sa il tra ining. This was a woma n who was no t to be left behind tending home and hearth once they h ad children . Of course, she was no t the fi rs t to do this, as there are lots of examples of sea cap tains bringing th eir fam ilies on board their sh ips for deep-sea voyages, but Exy's role as a ship's m anager of sorts extended well beyo nd most seago ing w ives' experience. Next time yo u see a tall ship come into port, check out the crew and you will probably find that the ratio of men to wo m en on board is ro ugh ly equal. Exy Johnson had somethi ng to do with that. Li nda Watts Newbury, Massachusetts

From the Editor: Ms. Watts is indeed correct when she says that wives and children were not unheard of aboard ship in the Age of Sail. W hile husba nds and wives attempted to maintain traditional roles aboard their seagoing homes, there are several stories of wives, often more educated than most of the crew, becoming skillful navigators and shiphandlers. No story is m ore dramatic than that of Mary Ann Patten, who fi rst went to sea in 1854 at the age of eighteen with her husband, Joshu a Patten, captain of the clipper ship Neptune's Car o ut of Bosron. During the long passages at sea (the Pattens took the ship from Boston to

Mary Ann Patten in 1857 San Francisco via Cape Horn, to Calcutta, London, and back to New York), Captain Patten taught his bride navigation, m eteorology, and other aspects of runnin g a ship. It was a good thing, too, because on the Pattens' second voyage to San Francisco in 1856, Joshua Patten becam e incapaci tated fro m illness before the ship reached Cape H orn . The fi rst mate was in irons, having been accused earl ier in the voyage of sabotaging the ship's chance at a quick passage. W ith the cap tain delirious from fever, the fi rst m ate unfit to take command, and a second m ate who apparently did not kn ow how to n avigate, a pregna nt Mary A nn stepped up and brought the ship safely in to San Francisco, making the passage in 136 days. Along the way, she nursed her husband in his sickbed and quashed a muti ny attempt by the fi rst m ate.