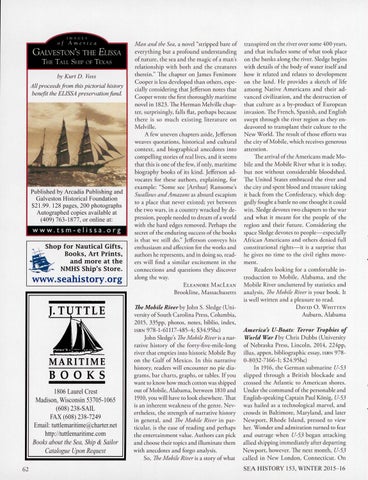 by Kurt D. Voss All proceeds from this pictorial history benefit the ELISSA preservation fund

Man and the Sea, a novel "stripped bare of everything but a profound understanding of nature, the sea and the magic of a man's relationship with both and the creatures therein." The chapter on James Fenimore Cooper is less developed than others, especially considering that Jefferson notes that Cooper wrote the first thoroughly maritime novel in 1823. The Herman Melville chapter, surprisingly, falls flat, perhaps because there is so much existing literature on Melville. A few uneven chapters aside, Jefferson weaves quotations, historical and cultural context, and biographical anecdotes into compelling stories of real lives, and it seems that this is one of the few, if only, maritime biography books of its kind. Jefferson advocates for these authors, explaining, for example: "Some see [Arthur] Ransome's Swallows and Amazons as absurd escapism to a place that never existed; ye t between the two wars, in a country wracked by depression, people needed to dream of a world with the hard edges removed. Perhaps the secret of the enduring success of the books is that we still do." Jefferson conveys his enthusiasm and affection for the works and authors he represents, and in doing so, readers will find a simi lar excitement in the connections and questions they discover along the way. ELEANORE MACLEAN

The M obile River by John S. Sledge (University of South Carolina Press, Columbia, 2015, 335pp, photos, notes, biblio, index, ISB N 978-1-61117-485-4; $34.95hc) John Sledge's The Mobile River is a narrative history of the fort y-five-mi le-long river that empties into historic Mobile Bay on the Gulf of Mexico. In this narrative history, readers will encounter no pie diagrams, bar charts, graphs, or tables. If you want to know how much cotton was shipped out of Mobile, Alabama, between 1810 and 1910, you will have to look elsewhere. That is an inherent weakness of the genre. Nevertheless, the strength of narrative history in general, and The Mobile River in particular, is the ease of reading and perhaps the entertainment value. Authors can pick and choose their topics and illuminate them with anecdotes and forgo analysis. So, The Mobile River is a story of what

transpired on the river over some 400 years, and that includes some of what took place on the banks along the river. Sledge begins with details of the body of water itself and how it related and relates to development on the land. He provides a sketch of life among Native Americans and their adva nced civilization, and the destruction of that culture as a by-product of European invasion. The French, Spanish, and English swept through the river region as they endeavored to transplant their culture to the New World. The res ult of those efforts was the city of Mobile, which receives generous attention. The arrival of the Americans made Mobile and the Mobile River what it is today, but not without considerable bloodshed. The United States embraced the river and the city and spent blood and treasure taking it back from the Confederacy, wh ich doggedly fought a battle no one thought it could win. Sledge devotes two chapters to the war and what it meant for the people of the region and their fu ture. Considering the space Sledge devotes to people-especially African Americans and others denied fu ll constitutional rights- it is a surprise that he gives no time to the civil rights movement. Readers looking for a comfortable introduction to Mobile, Alabama, and the Mobile River uncluttered by statistics and analysis, The Mobile River is your book. It is well written and a pleasure to read. DAVID 0. WHITTEN Auburn, Alabama

America's U-Boats: Terror Trophies of World War / by C hris D ubbs (University of Nebraska Press, Lincoln, 2014, 224pp, illus, appen, bibliographic essay, ISBN 9780-8032-7166-1; $24.95hc) In 1916, the German subma rine U-53 slipped through a British blockade and crossed the Atlantic to American shores. Under the command of the personable and English-speaking Captain Paul Konig, U-53 was hailed as a technological marvel, and crowds in Baltimore, Maryland, and later Newport, Rhode Island, pressed to view her. Wonder and admiration turned to fear and outrage when U-53 began attacking allied shipping immediately after departing Newport, however. The next month, U-53 called in New London, Connecticut. On SEA H ISTORY 153, WINTER20 15- 16