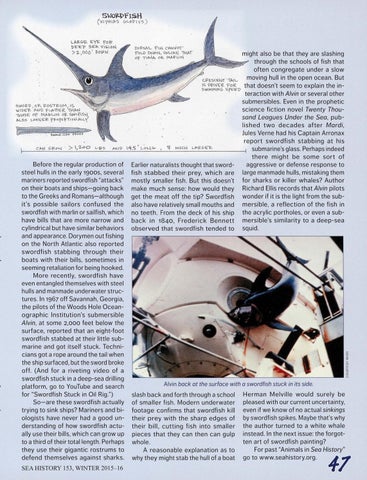 might also be that they are slashing through the schools of fish that often congregate under a slow .!3&quot;&#39;--:\&lt;t:sc~1--.1T \A\L- moving hull in the open ocean . But 1s 01&lt;1\f&#39;tR FoR that doesn&#39;t seem to explain the in, S&#39;J&#39;l\MM\NG SfE:E:C&gt; d · teraction with Alvin or several other submersibles. Even in the prophetic science fiction novel Twenty Thousand Leagues Under the Sea, published two decades after Mardi, Jules Verne had his Captain Arronax report swordfish stabbing at his 6 ~~~~~~~~i submarine~glass.Perhapsindeed ~~-c&quot;&#39;_N~G-~_a~~-&gt;~&#39;•-~_0_0~~-a_s~_~_N_o~1~-~~ · L-~-~-&amp;~-&#39;-~~_M_vc_H~L_A_~_ there might be some sort of Before the regular production of Earlier naturalists thought that swordaggressive or defense response to steel hulls in the early 1900s, several fish stabbed their prey, which are large manmade hulls, mistaking them mariners reported swordfish &quot;attacks&quot; mostly smaller fish. But this doesn&#39;t for sharks or killer whales? Author on their boats and ships-going back make much sense: how would they Richard Ellis records that Alvin pilots to the Greeks and Romans-although get the meat off the tip? Swordfish wonder if it is the light from the subit&#39;s possible sailors confused the also have relatively small mouths and mersible, a reflection of the fish in swordfish with marlin or sailfish, which no teeth. From the deck of his ship the acrylic portholes, or even a subhave bills that are more narrow and back in 1840, Frederick Bennett mersible&#39;s similarity to a deep-sea cylindrical but have similar behaviors observed that swordfish tended to squid . and appearance. Dorymen out fishing on the North Atlantic also reported swordfish stabbing through their boats with their bills, sometimes in seeming retaliation for being hooked. More recently, swordfish have even entangled themselves with steel hulls and manmade underwater structures. In 1967 off Savannah, Georgia, the pilots of the Woods Hole Oceanographic Institution&#39;s submersible Alvin, at some 2,000 feet below the surface, reported that an eight-foot swordfish stabbed at their little submarine and got itself stuck. Technicians got a rope around the tail when the ship surfaced, but the sword broke off. (And for a riveting video of a swordfish stuck in a deep-sea drilling Alvin back at the surface with a swordfish stuck in its side. platform, go to YouTube and search for &quot;Swordfish Stuck in Oil Rig.&quot;) slash back and forth through a school Herman Melville would surely be So-are these swordfish actually of smaller fish. Modern underwater pleased with our current uncertainty, trying to sink ships? Mariners and bi- footage confirms that swordfish kill even if we know of no actual sinkings ologists have never had a good un- their prey with the sharp edges of by swordfish spikes. Maybe that &#39;s why derstanding of how swordfish actu- their bill, cutting fish into smaller the author turned to a white whale ally use their bills, which can grow up pieces that they can then can gulp instead. In the next issue: the forgotten art of swordfish painting? to a third of their total length. Perhaps whole . For past &quot;Animals in Seo History&quot; they use their gigantic rostrums to A reasonable explanation as to defend themselves against sharks. why they might stab the hull of a boat go to www.seahistory.org.