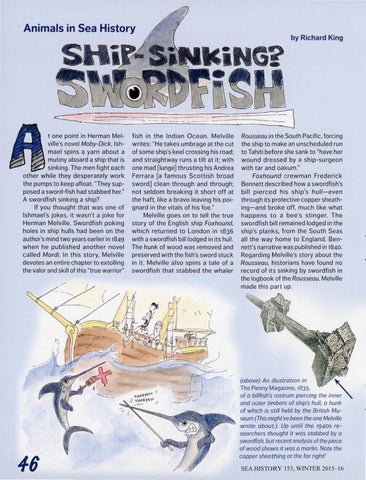 t one point in Herman Melville&#39;s novel Moby-Oick, Ishmael spins a yarn about a mutiny aboard a ship that is sinking. The men fight each other while they desperately work the pumps to keep afloat. &quot;They supposed a sword-fish had stabbed her.&quot; A swordfish sinking a ship? If you thought that was one of Ishmael&#39;s jokes, it wasn&#39;t a joke for Herman Melville. Swordfish poking holes in ship hulls had been on the author&#39;s mind two years earlier in 1849 when he published another novel called Mardi. In this story, Melville devotes an entire chapter to extolling the valor and skill of this &quot;true warrior&quot;

fish in the Indian Ocean. Melville writes: &quot;He takes umbrage at the cut of some ship&#39;s keel crossing his road ; and straightway runs a tilt at it; with one mad [lunge] thrusting his Andrea Ferrara [a famous Scottish broad sword] clean through and through; not seldom breaking it short off at the haft, like a bravo leaving his poignard in the vitals of his foe.&quot; Melville goes on to tell the true story of the English ship Foxhound, which returned to London in 1836 with a swordfish bill lodged in its hull . The hunk of wood was removed and preserved with the fish&#39;s sword stuck in it. Melville also spins a tale of a swordfish that stabbed the whaler

Rousseau in the South Pacific, forcing the ship to make an unscheduled run to Tahiti before she sank to &quot;have her wound dressed by a ship-surgeon with tar and oakum.&quot; Foxhound crewman Frederick Bennett described how a swordfish&#39;s bill pierced his ship &#39;s hull-even through its protective copper sheathing-and broke off, much like what happens to a bee &#39;s stinger. The swordfish bill remained lodged in the ship&#39;s planks, from the South Seas all the way home to England . Bennett&#39;s narrative was published in 1840. Regarding Melville&#39;s story about the Rousseau, historians have found no record of its sinking by swordfish in the logbook of the Rousseau. Melville made this part up.

(above) An illustration in ;· ~, · ~ The Penny Magazine, 1835, &quot; of a billfish &#39;s rostrum piercing the inner and outer timbers of ship&#39;s hull, a hunk of which is still held by the British Museum (This might&#39;ve been the one Melville wrote about.). Up until the 1940s researchers thought it was stabbed by a swordfish, but recent analysis of the piece of wood shows it was a marlin. Note the copper sheathing at the far right!