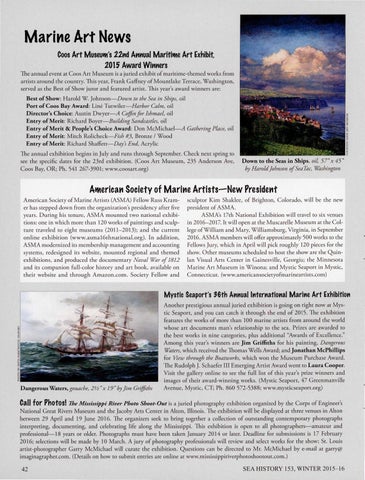 Down to the Seas in Ships, oil 57&quot; x 45&quot; by Harold Joh nson ofSeaTac, Washington

At11erican Society of Marine Artists-New President American Society of Marine Artists (ASMA) Fellow Russ Kramer has stepped down from the organization&#39;s presidency after five years. During his tenure, ASMA mounted two national exhibitions: one in which more than 120 works of paintings and sculpture traveled to eight museums (201 1-2 013); and the current online exhibition (www.asma16thnational.org). In addition, ASMA modernized its membership management and accounting systems, redesigned its website, mounted regional and themed exhibitions, and produced the documentary Naval War of 1812 and its companion fu ll-color history and art book, available on their website and through Amazon.com . Society Fellow and

sculptor Kim Shaklee, of Brighton, Colorado, will be the new president of ASMA. ASMA&#39;s 17th National Exhibition will travel to six venues in 2016-2017. Ir will open at the Muscarelle Museum at the College ofWilliam and Mary, Williamsburg, Virginia, in September 2016. ASMA members will offer approximately 500 works to the Fellows Jury, which in April will pick roughly 120 pieces for the show. Other museums scheduled to host the show are the Quinlan Visual Arts Center in Gainesville, Georgia; the Minnesota Marine Art Museum in Winona; and Mystic Seaport in Mystic, Connecticut. (www.americansocietyofmarineartists .com)

Another prestigious annual juried exhibition is going on right now at Mystic Seaport, and yo u can catch it through the end of 2015. The exhibition features the works of more than 100 marine arti sts from around the wo rld whose art documents man&#39;s relationship to the sea. Prizes are awarded to the best works in nine categories, plus additional &#39;&#39;Awards of Excellence.&quot; Among this yea r&#39;s winners are Jim Griffiths for his painting, Dangerous Waters, which received the Thomas Wells Award; and J onathan McPh illips for View through the Boatworks, which won the Museum Purchase Award. The Rudolph J. Schaefer III Emerging Artist Award went to Laura Cooper. Visit the gallery online to see the full list of thi s year&#39;s prize winners and images of their awa rd-winning works. (Mystic Seaport, 47 Greenmanville Avenue, Mystic, CT; Ph. 860 572-5388; www. mys ticseaport.org)

Call for Photos! Ihe Mississippi River Photo Shoot-Out is a juried photography exhibition organized by the Corps of Engineer&#39;s National Great Rivers Museum and the Jaco by Arts Center in Alton, Illinois. The exhibition will be displayed at three venues in Alton between 29 April and 19 June 2016. The organizers seek to bring together a collection of outstanding contemporary photographs interpreting, documenting, and celebrating life along the Mississippi. This exh ibition is open to all photographers-amateur and professional- 18 years or older. Photographs must have been taken January 2014 or later. Deadline for submissions is 17 February 2016; selections will be made by 10 March. A jury of photography professionals will review and select works for the show; St. Louis artist-photographer Garry McMichael will curate the exhibition. Questions can be directed to Mr. McMichael by e-mail at garry@ imaginagrapher.com. (Details on how to submit entries are online at www.mississippiriverphotoshootout.com.) 42