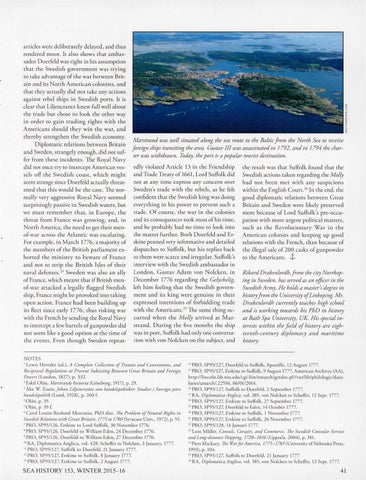 articles were deliberately delayed, and thus rendered moot. It also shows chat ambassador Doerfeld was right in his ass umption that the Swedish government was trying to take advantage of the war between Britain and its North American colonists, and that they ac tually did not take any actions against rebel ships in Swedish pores. It is clear that Liljencrantz knew full well abo ut the trade but chose to look the ocher way in order to gain trading rights with the Americans should they win the war, and thereby strengthen the Swedish economy. lvfarstrand was well situated along the sea route to the Baltic from the North Sea to receive Diplomatic relations between Britain foreign ships transiting the area. Gustav !II was assassinated in 1792, and in 1794 the charand Sweden, strangely enough, did not sufter was withdrawn. Today, the port is a popular tourist destination. fer from these incidents. The Royal Navy did not once try to intercept American ves- edly violated Art icle 13 in the Friendship the result was that Suffolk found that the sels off the Swedish coast, which might and Trade Treaty of 1661, Lord Suffolk did Swedish ac tions taken regarding the Molly seem strange since Doerfeld actually threat- not at any time express any concern over h ad not been met with any suspicions ened that this wo uld be the case. The nor- Sweden's trade with the rebels, as he felt within the English Court. 26 In the end, the mally very aggressive Royal Navy seemed confident that the Swedish king was doing good diplomatic relations between Great surprisingly passive in Swedish waters, but everythi ng in his power to prevent such a Britain and Sweden were likely preserved we must remember chat, in Europe, the trade. Of course, the war in the colonies more because of Lord Suffolk's pre-occuthreat from France was growing, and, in and its consequences took most of his time, pation with more urgent political matters, Nort h America, the need to get their men- and he probably h ad no time to look into such as the Revolutionary War in the of-war across the A tlantic was escalati ng. che matter further. Both Doerfeld and Er- American colonies and keeping up good For example, in March 1776, a majority of skine penned very informative and detailed relations with the French, than because of the members of the British parliament ex- dispatches to Suffolk, but his replies back the illegal sale of 200 casks of gunpowder horted the ministry to beware of France w chem were scarce and irregular. Suffolk's to the Americans. .!. and not to strip the British Isles of their interview with the Swedish ambassador in naval defenses. 24 Sweden was also an ally London, G ustav Adam von Nokken, in Rikard Drakenlordh, from the city Norrkopof France, which meant that if British men- December 1776 regarding the Gelychelig, ing in Sweden, has served as an officer in the of-war attacked a legally flagged Swedish left him feeling chat the Swedish govern- Swedish A rmy. He holds a master's degree in ship, France might be provoked into taking ment and its king were genuine in their history from the University ofLinkoping. Mr. open action. France had been building up expressed intentions of forbidding trade Drakenlordh currently teaches high school its fleet since ea rly 1776, thus risking war with the Americans. 25 The same thing oc- and is working towards his PhD in history with the French by sendin g the Royal Navy curred when the Molly arrived at Mar- at Bath Spa University, UK His special into intercept a few barrels of gunpowder did strand. During the five months the ship terests within the field of history are eighnot seem like a good option at the time of was in port, Suffolk had on ly one conversa- teenth-century diplomacy and maritime the events. Even though Sweden repeat- tion with von Nokken on the subject, and history. NOT ES 1 Lew is H ensl er (ed.), A Complete Collection of Treaties and Con ventions, and Reciprocal Regulations at P resent Subsisting Between Great Britain and Foreign Powers (Lo ndon, 1827), p. 33 2. 2 Eski l O lan , M arstrands historia (Goreborg, 1917), p. 29. 3 Ake W. Essen , Johan Liljencrantz som handelspolitiker: Studier i Sveriges yttre handelspolitik (Lund , 1928), p. 260 f. ' Ol an, p. 35. ' Ol an, p. 39 f. 6 Carol Lo ui se Roslund M e rc ur io, PhD d iss . The Problem of Neutral Rights in Swedish Relations with Great Britain, 1775to 1780 (Sy racuse U niv., 1972), p. 55. 7 PRO, SP95/1 26 , Erskine ro Lo rd Suffolk, 30 Nove mber 1776. 8 PRO, SP95/ 126, Doerfeld ro Wil lia m Ed en, 24 D ecember 1776 . 9 PRO, SP95/ 126, Doerfeld ro W illiam Eden, 27 D ecember 1776 . 10 RA, Di plo mari ca Angli ca, vol. 428 , Scheffer ro N olcken, 3 January, 1777. 11 PRO, SP95/ 127, Suffo lk ro Doerfeld , 2 1J anua ry 1777. 12 PRO, SP9 5/ 127, Erskine ro Suffolk, 8 January 1777. 13 PRO, SP9 5/ 127, Erskine ro Suffolk, 2 Au gusr 1777.