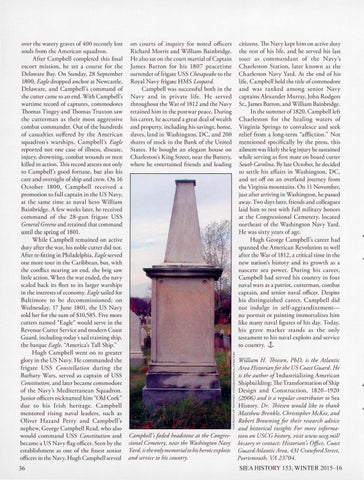 over rhe watery graves of 400 recendy lose on courts of inquiry for noted officers citizens. The Navy kept him on active duty Richard Morris and William Bainbridge. the rest of his life, and he served his last souls from the American squadron . After Campbell complered chis final H e also sat on the court martial of Captain tour as commandant of the Navy's escort mission, he set a course for the James Barron for his 1807 peacetime Charleston Sration, later known as the Delaware Bay. On Sunday, 28 Seprember surrender of frigate USS Chesapeake to the Charleston Navy Yard. At the end of his 1800, Eagle dropped anchor at Newcasde, Royal Navy frigate HMS Leopard. life, Campbell held the title of commodore D elaware, and Campbell's command of Campbell was success ful both in the and was ranked among senior Navy rhe cutrer came to an end. With Ca mpbell 's Navy and in private life. He served captains Alexa nder Murray, John Rodgers wartime record of captures, commodores throughout the War of 1812 and the Navy Sr., James Barron, and William Bainbridge. In the summer of 1820, Campbell left Thomas Tingey and Thomas Truxton saw retained him in the postwar peace. During the cutterman as their most aggressive his career, he accrued a great deal of wealth Charleston for the healing waters of combat commander. Our of the hundreds and property, including his savings, home, Virginia Springs to convalesce and seek of casualties suffered by rhe American slaves, land in Washington, DC, and 200 relief from a long-term "affiiction." Not squadron's warships, Campbell 's Eagle shares of stock in the Bank of the United mentioned specifically by the press, this reported not one case of illness, di sease, States. He bought an elegant house on ailment was likely the leg injury he sustained injury, drowning, combat wounds or men Charleston's King Street, near the Battery, while serving as first mate on board cutter killed in action. This record attests not only where he entertained fri ends and leading South Carolina. By late October, he decided to Campbell 's good fortune, bur also his to settle his affairs in Washington , DC, care and oversight of ship and crew. On 16 and set off on an overland journey from October 1800, Campbell received a the Virginia mountains. On 11 November, promotion to full captain in the US Navy, just after arriving in Washington, he passed at the same time as naval hero William away. Two days later, friends and colleagues laid him to rest with full mi litary honors Bainbridge. A few weeks later, he received command of the 28-gun frigate USS at the Congressional Cemetery, located northeast of the Washington Navy Yard. General Greene and retained that command He was sixty years of age. until the spring of 1801. While Campbell remained on active Hugh George Campbell's career had duty after the war, his noble cutter did not. spanned the American Revolution to well after the War of 1812, a critical time in the After re-fitting in Philadelphia, Eagle served one more tour in the Caribbean, but, with new narion's history and its growrh as a the conflict nearing an end, the brig saw nascem sea power. During his career, little action. When the war ended, the navy Campbell had served his country in four naval wars as a patriot, cutterman, combat sca led back its fleet to its larger warships in the interests of economy. Eagle sailed for captain, and senior naval officer. Despite Baltimore to be decommissioned; on his distinguished career, Campbell did W ednesday, 17 June 1801, the US Navy not indulge in self-aggrandizementsold her for the sum of $10,585. Five more no portrait or painting immortalizes him like many naval figures of his day. Today, cutters named "Eagle" would serve in the Revenue Cutter Service and modern Coast his grave marker srands as the only Guard, including today's sa il training ship, testament to his naval exploits and service the barque Eagle, "America's Tall Ship." to country. J, Hugh Campbell went on to greater William H. Thiesen, PhD, is the Atlantic glory in the US Navy. He commanded the Area H istorian for the US Coast Guard. H e frigate USS Constellation during the is the author of Indu strializing American Barbary Wars, served as captain of USS Constitution, and later became commodore Sh ipbuilding: The Transformation of Ship of the Navy's Mediterranean Squadron. Design and Construction, 1820- 1920 (2006) and is a regular contributor to Sea Junior officers nicknamed him "Old Cork" due to his Irish h erirage. Campbell History. Dr. Thiesen would like to thank m entored rising n aval leaders, such as Matthew B renkle, Christopher McKee, and Robert Browning for their research advice Oliver H aza rd Perry a nd Ca mpbell 's nephew, George Campbell Read, who also and historical insights For more informawould command USS Constitution and Campbell 's Jaded headstone at the Congres- tion on USCG history, visit www. us cg. mill became a US Navy flag officer. Seen by the sional Cemetery, near the Washington Navy his1tory or contact: H istorian's Office, Coast establishment as one of the finest senior Yard, is the only memorial to his heroic exploits GutardAtlantic Area, 431 Crawford Street, officers in the Navy, Hugh Campbell served and service to his country. Porrtsmouth, VA 23704.