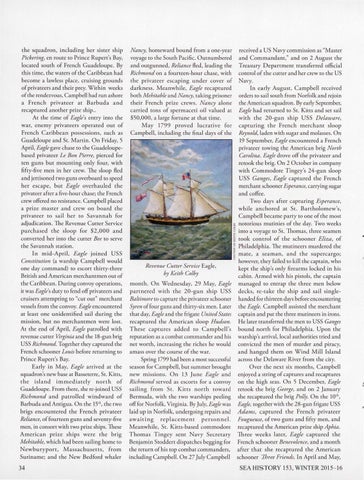 Nancy, homeward bound from a one-year

voyage to the South Pacific. O utnumbered and outgunned, Reliance fled, leading the Richmond on a fourteen-hour chase, with the privateer escaping under cover of d arkness. Meanwhile, Eagle recaptured both Mehitable and Nancy, taking prisoner their French prize crews. Nancy alone carried tons of spermaceri oil valued at $50,000, a large fort une at that rime. May 1799 proved lucrative for Campbell, including the final days of the

received a US Navy commission as &quot;Master and Commandant,&quot; and on 2 August the located south of French Guadeloupe. By Treas ury Department transferred official this rime, the waters of the Caribbean had control of the cutter and her crew to the US become a lawless place, cruising gro unds Navy. of privateers and their prey. Within weeks In ea rly August, Campbell received of the rendezvous, Campbell had run as hore orders to sail south from Norfolk and rejoin a Fren ch priva teer at Barbud a a nd the American squadron. By early September, recaptured another prize ship .. Eagle had re turned to Sc. Kitts and set sail At the time of Eagle&#39;s entry into the with the 20-gun sh ip USS D elaware, war, enemy priva teers operated out of capturing the French merchant sloop French Ca ribbean possess ions, such as Reynold, laden with sugar and molasses. On G uadeloupe and St. Martin. On Friday, 5 19 September, Eagle encountered a French April, Eagle gave chase to the G uadeloupeprivateer towing the American brig North based privateer Le Bon Pierre, pierced for Carolina. Eagle drove off the privatee r and ten guns but mounting only four, with retook the brig. On 2 October in company fifty-five men in her crew. The sloop fled with Commodore Tingey&#39;s 24-gun sloop and jettisoned two guns overboard to speed USS Ganges, Eagle captured the French h er escape, but Eagle overhauled the merchant schooner Esperance, carrying sugar privateer after a five-hour chase; the French and coffee. crew offered no resistance. Campbell placed Two days after capturing Esperance, a prize mas ter and crew on board the while an chored at Sc. Bartholom ew&#39;s, privateer to sail her to Sava nn ah for Campbell became party to one of the mos t adjudication. The Revenue C utter Service notorious mutinies of the day. Two weeks purchased the sloop for $2, 000 and into a voyage to Sc. Thomas, three seamen converted her into the cutter Bee to serve rook control of the schooner Eliza, of the Savannah station. Philadelphia. The mutineers murdered the In mid-April, Eagle joined USS m ate, a sea man, and the superca rgo; Constitution (a warship Campbell wo uld however, they failed to kill the captain, who Revenue Cutter Service Eagle, one day command) to escort thirty-three kept rhe ship&#39;s only firearms locked in his by Keith Colby British and American merchantmen out of cabin. Arm ed with his pistols, the captain the Caribbean. During convoy operations, m onth . On Wednesd ay, 29 May, Eagle managed to entrap the three men below it was Eagle&#39;s duty to fend off privateers and p artnered wi th th e 2 0 -gun ship USS decks, re- rake the ship and sa il sin glecruisers attempting to &quot;cut out&quot; merchant Baltimore to capture the privateer schooner handed for thirteen days before encountering vessels from the convoy. Eagle encountered Syren of four guns and thirty-six men. Later the Eagle. Campbell assisted the merchant at least one unidentified sail during the chat day, Eagle and the fri gate United States captain and put the three mutineers in irons. mission, but no merchant men we re lose. recaptu red the American sloop Hudson. H e later transferred the men to USS Ganges At the end of Ap ril, Eagle patrolled with T h ese captures add ed to Camp bell &#39;s bound north for Philadelphia. Upon the revenue cutter Virginia and the 18-gun brig reputation as a combat commander and his wa rship&#39;s ar rival, local authorities tried and USS Richmond. Together they captured the net worth, increasing the riches he wo uld convicted the men of murder and piracy, French schooner Louis before returning to amass over the course of the war. and h an ged them on Wind Mill Island Prince Rupert&#39;s Bay. Spring 1799 had been a most successful across the Delawa re River from the city. Ea rly in May, Eagle arrived at the season for Campbell, but summer brought Over the next six months, Campbell squadron&#39;s new base at Basseterre, Sc. Kitts, new missions. On 13 June Eagle a nd enjoyed a string of captures and recaptures the isla nd imm ediately north of Richmond served as escorts fo r a convoy on the high seas. On 5 December, Eagle G uadeloupe. From there, she re-joined USS sa iling from St. Kitts n orth toward retook th e brig George, and on 2 January Richmond and patrolled windward of Bermuda, wi th the two wa rships peeling she recaptured the brig Polly. On the 10&#39;&quot;, Barbuda and Antigua. On the 15&#39;h, the two off fo r Norfolk, Virginia. By July, Eagle was Eagle, together with the 28-gun fri gate USS brigs enco untered the French privateer laid up in Norfolk, undergoing repairs and Adams, captured the French priva teer Reliance, of fo urteen guns and seventy-five awa1 tln g replacement personnel. Fougueuse, of rwo guns and fifty men, and men, in consort with two prize ships. These Meanwhile, Sc. Kitts-based commodore recaptured the A merican prize ship Aphia. American prize ships we re the brig Thomas T ingey se nt Navy Secretary Three week s later, Eagle captured the Mehitable, which had been sailing home to Benjamin Stodden dispatches begging for French schooner Benevolence, and a month Newburyport , Massachusetts, from the return of his top combat commanders, after that she recaptured the American Suriname; and the New Bedford whaler including Campbell. On 27 July Campbell schooner &#39;.Th ree Friends. In April and May, 34