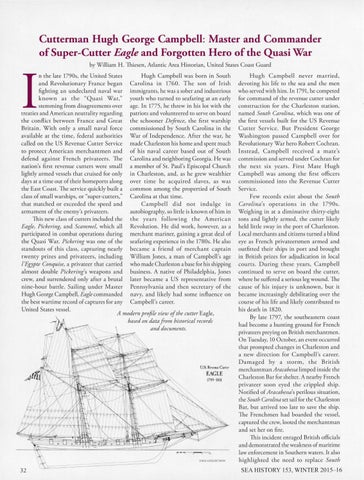 Hugh Campbell was born in Sourh Ca rolina in 1760. T he son of Irish immigranrs, he was a sober and indusrrious yourh who turned to seafaring ar an early age. In 1775, he rhrew in his lor wirh rhe parriors and volunteered to serve on board rhe schooner Defence, rhe firsr warship commissioned by Sourh Carolina in rhe W ar of Independence. Afrer rhe war, he made Charleston his home and spenr much of his n aval career based our of Sourh Carolina and neighboring Georgia. H e was a member of Sr. Paul&#39;s Episcopal C hurch in C harleston, and, as he grew wealrhier ove r time he acquired slaves , as was common among rhe properried of Sourh Carolina ar rhat rime. C ampbell did nor indulge in autobiography, so lirde is known of him in the years followin g rhe A m erican Revolurion. He did work, however, as a merchant m ariner, gaining a great dea l of seafaring experience in rhe 178 0s. H e also became a friend of mercha nt caprain W illiam Jones, a man of Campbell &#39;s age who made Charleston a base for his shipping business . A narive of Philadelphia, Jones later becam e a US represenrarive fro m Pennsylvania and rhen secrerary of rhe navy, and likely had some influence on Campbell &#39;s career.

A modern p rofile view of the cutter Eagle, based on data from historical records and documents.