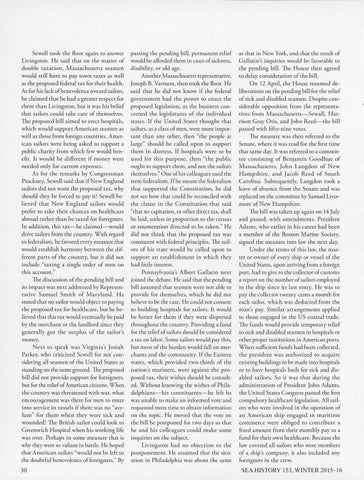 Sewell rook che floor again to answer passing che pending bill, permanent relief Livings ton. H e said chat on che matter of wo uld be afforded them in cases of sickness, double raxation, M assachusetts seamen disability, or old age. would still have to pay town taxes as well A nocher M assachusen s representacive, as the proposed federal tax for their health . Joseph B. Varnum, chen rook che floor. H e As for his lack of benevolence toward sailors, said char he did noc know if the federal he claimed thac he had a greacer respecc for government h ad the power to enacc the chem chan Livi ngston, but it was his belief proposed legislacion, as che business conthac sailors could rake care of chemselves. cerned the legislamres of the individual The proposed bill aimed to erecc hospirals, states. If the U n ited Scates thought thac which would supporc American seamen as sailors, as a class of men, were more imporwell as chose from foreign countries . Amer- tant than any other, then &#39;&#39;che people ac ican sailors were being asked to support a large&quot; should be called upon to suppo rt public ch aricy from which few would ben- chem in distress. If hospitals were to be efit. It would be different if m oney were used for chis purpose, then &quot;the public needed only fo r current expenses. oughc to supporc chem, and noc che sailors As fo r che remarks by Congressman themselves.&quot; One of his colleagues used che Pinckney, Sewell said char if N ew England cerm federalism. Ifhe meanr che federalism sailors did not wa nt the proposed rax, why char supported the Constitution, he did should chey be fo rced to pay it? Sewell be- not see how char could be reconciled with lieved char N ew E ngland sailors wo uld the clause in the C onstitucion rhac said prefer to ra ke cheir chances on healthcare &quot;that no capitation, or other direct tax, shall abroad rather than be taxed fo r fo reigners. be laid, unless in proportion to che census In addition, chis tax-he claimed-would or enumeration directed to be taken.&quot; He drive sailors from the country. With regard did not think that the proposed tax was to federalism, he favo red every measure char consistent with federal principles . The sa ilwo uld establish harmony between the dif- ors of his state would be called upon to ferent pans of the country, bur it did nor support an establishment in w hich they include &quot;raxing a single order of men on had little interest. this account.&quot; Pennsylva nia&#39;s Al bert Gall atin next The discussion of the pending bill and joined che debate. H e said chat che pending ics impac t was next addressed by Represen- bill ass umed thac seamen were noc able to racive Samuel Smich of M a ryland. H e provide for themselves, which he did noc stated that no sailor would obj ecc to paying believe to be the case. H e could not consent che proposed rax for healchcare, buc he be- to building hospitals for sailors. It would lieved char chis rax would evenmally be paid be better for them if they were dispersed by the merch ant or che landlord since chey chroughout the count ry. Providing a fund generally goc che surplus of the sailor&#39;s for the relief of sailors should be considered money. a tax on labor. Some sailors would pay this, Next to speak was Virginia&#39;s Jos iah but mosc of the burden wo uld fall on merParker, who criticized Sewell for noc con- ch ants and the communicy. If che Eastern sidering all seamen of che United Scares as states, which provided two- thirds of the sranding on the same ground. The proposed n ation&#39;s mariners, were against the probill did not provide support for foreigners, posed tax, their wishes should be consultbuc for che relief of American citizens. When ed. Without knowing the wishes of Philache country was chreacened with wa r, whac delphians -his co nstituem s-h e felt he encouragement was chere for men to enter was unable to make an info rmed vo te and into serv ice in vessels if there was no &quot;asy- requesced more rime to obtain info rmation lum&quot; fo r them when they were sick and on the topic. H e moved chat the voce on wounded ? The British sailor could look to che bill be poscponed for two days so char G reenwich H ospira! when his working life he and his colleagues could make some was over. Perhaps in some measure that is inquiries on the subject. why they were so valiant in battle. He hoped Livings ron h ad no obj ection to che th at A merican sailors &quot;would noc be left to poscponement. H e ass umed chat the situthe doubcful benevolence of foreigners.&quot; By ation in Philadelphia was about che same

as that in New Yo rk, and that the result of G allatin&#39;s inquiries wo uld be favorable to the pending bill. The H ouse then agreed to delay consideration of the bill. On 12 April, the H ouse resumed deliberations on the pending bill fo r the relief of sick and disabled seamen. D espite considerable opposicion from che representatives from Massachusects- Sewall, H arrison G ray Oris, and John Reed- the bill passed wich fi ft y-nine voces . The measure was then referred to the Senate, where it was read for the first time rhac same day. le was referred to a committee consisting of Benjamin Goodhue of M assac husetts, John Langdon of New H ampshire, and J aco b Reed of South Carolina. Subsequently, Langdon rook a leave of absence from che Senate and was replaced on the committee by Samuel Livermore of New H ampshire. The bill was taken up again on 14 July and passed, wich amendments. President Adams, who earlier in his career had been a member of the Boston M arine Society, signed the measure into law the next day. U nder the terms of this law, the master or owner of every ship or vessel of the U niced States, upon arriving from a fo reign port, had to give to the collector of customs a report on the number of sailors employed in che ship since ics lase entry. H e was to pay che collector cwenty cents a month fo r each sailor, which was deducted from the m an&#39;s pay. Similar arrangements applied to those engaged in the US coastal trade. The funds wo uld provide temporary relief to sick and disabled seamen in hospitals or other proper institutions in American ports. W hen sufficient funds had been collecced , the pres ident was authori zed to acquire existing buildings to be made into hospitals or to have hospitals built for sick and disabled sailors. So it was that during the administration of President John Adams, the United States C ongress passed the firsc compulsory healthcare legislation. All sailors who were involved in che operacion of an A merican ship engaged in m aritime commerce were obliged to conuibute a fi xed amount fro m their monthly pay to a fund fo r their own healthcare. Because the law covered all sailors who were members of a ship&#39;s company, it also included any foreigners in che crew.