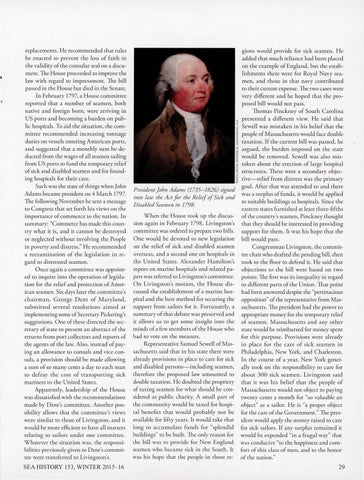 replace ments. H e recommended that rules be enac ted to preve nt the loss of faith in rhe validity of the consular seal on a document. The House proceeded to improve the law with regard to impressm ent. The bill passed in the House bur died in rhe Senate. In February 1797, a H ouse committee reported that a number of seam en, both nati ve and foreign born, were a rriving in US pores and becoming a burden on public hospitals. To aid rhe situation, rhe com mittee recommended increasing tonnage duties on vessels enterin g A merica n ports, and sugges ted rhar a monthly sum be deducted from the wages of all seamen sailing from US ports to fund the tempo rary relief of sick and disabled seamen and fo r fo unding hospitals for their care. Such was the state of things when John Adams became president on 4 March 1797. The fo llowing November he sent a message to Congress rhar set forth his views on the impo rta nce of commerce to rhe nation . In summary: &quot;Commerce has made rhis country what it is, and it cannot be destroyed or neglected without involving rhe People in poverty and distress.&quot; H e recommended a reexamination of the legislation in regard to distressed seamen . O nce again a committee was appointed to inquire into rhe operation oflegislarion fo r the relief and protection of Am erican seamen. Six days later the committee&#39;s c ha irma n, George D ent o f Maryland, submitted several resolutions ai m ed at implementing some of Secretary Pickerin g&#39;s suggestions. One of these di rec ted the secretary of stare to present an abstract of the returns from port collectors a nd repo rts of the agents of the law. A lso, instead of paying an allowance to consuls a nd vice consuls, a provision should be made allowing a sum of so many cents a day ro each man to d efray the cost of tra nspo rting sick m ariners ro the United Srares . Apparently, leadership of the H ouse was dissatisfied with the recommendatio ns made by D em &#39;s committee. A nother possibility allows rhar the committee&#39;s views were similar to those of Livingston, and it wo uld be more efficient to have all matters relating to sailors under one comm ittee. W hatever rhe situation was, rhe responsibil iries prev iously given ro D em &#39;s committee were tra nsferred to Livingston&#39;s.

gions would provide for sick seamen. H e added rhar much reliance had been placed on the example of England, bur the establishments there were for Royal Navy seamen, and those in rhar navy contributed to their current expense. The two cases were very different a nd he hoped rhar the proposed bill wo uld nor pass. Thom as Pinckney of South Carolin a presented a different view. He said that Sewell was mistaken in his belief rhar the people of M assachusetts would face double taxation. If the current bill was passed, he argued, the burden imposed on the srare would be removed . Sewell was also mistaken about the erection of large hospital structures. These were a secondary obj ective-relief from distress was the prima ry goal. A fter rhar was attended to and there President john Adams (1735-1826) signed was a surplus of funds , it would be applied into law the Act for the Relief of Sick and to suitable buildings as hospitals. Since rhe Disabled Seamen in 1798. eastern stares furn ished at least three-fifth s W hen rhe H ouse rook up the discus- of the country&#39;s seamen, Pinckney thought sion again in February 1798, Livi ngston&#39;s rhar they should be interested in providing committee was ordered to prepare two bills. support for them. Ir was his hope rh ar rhe One would be devoted to new legislation bill would pass. on the relief of sick and disabled seam en Congressman Livingston, rhe commitoverseas, and a second one on hospitals in tee chair who drafted rhe pending bill, then the Uni ted Stares. A lexander H amilton&#39;s rook to the floo r to defend ir. H e said that report on m arine hospita ls and related pa- objections to the bill were based on rwo pers was referred to Livingston&#39;s committee. points: The first was its inequality in regard On Livingston&#39;s m orion, the H o use dis- to different pa res of the Union. Th ar point cussed rhe establishment of a marine hos- had been answered despite the &quot;pertinacious pital and the bes t method fo r securing the opposition&quot; of the representative from Massupport from sa ilors fo r it. Fortunately, a sachusetts. The president had the power ro summary of rhar debate was preserved and appropriate money for the tempora ry relief ir allows us to get some in sight into rhe of seam en. Massachusetts and any other minds of a few members of the House who stare wo uld be reimbursed for money spent had to vote on the m easure. fo r this purpose. Provisions we re already Representative Samuel Sewell of M as- in place for the care of sick seam en in sachusetts sa id that in h is stare there were Philadelphia, New York, and C harles ton. already provisions in place to care fo r sick In the course of a year, N ew York generand disabled perso ns -including seam en, ally rook on the responsibility ro care for therefore the pro posed law amounted to about 300 sick seamen . Livings ton sa id double taxa tion . H e do ubted the propriety rh ar it was his belief rhar rhe people of of taxing seamen fo r what should be con- Massachusetts would not object ro paying sidered as public ch arity. A sm all part of twenty cents a month for &quot;so va luable an the community wo uld be taxed for hospi- object&quot; as a sailor. H e is &quot;a proper o bject tal benefits that wo uld probably n ot be for the care of rhe G overnment.&quot; The presavailable for fi fty yea rs. Ir wo uld rake rhar ident wo uld apply the money raised to care lon g ro accumulate funds for &quot;splendid fo r sick sa ilors. If any surplus rem ained it buildings&quot; robe buil t. The only reason fo r wo uld be expended &quot;in a fru gal way&quot; rh ar the bill was to provide for New England was conducive &quot;to rhe happiness and comseamen who became sick in rhe Sourh . Ir fo rt of this class of m en, and to the honor was his hope that the people in those re- of the nation .&quot;