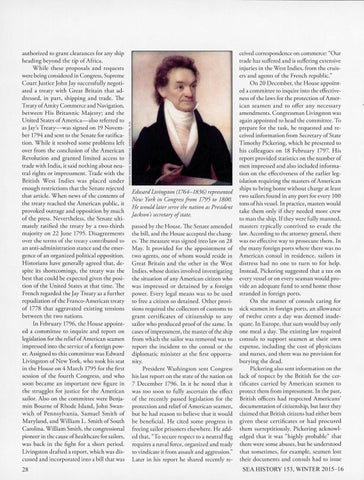 authorized to grant clearances for any ship heading beyond the tip of Africa. W hile th ese proposals and requests were being considered in Congress, Supreme C ourt Justice John Jay successfully negotiated a treaty with Great Britain that addressed , in part, shipping and trade. The Treaty of Amity Commerce and Navigation, between His Britannic Majesty; and the U nited States of America-also referred to as Jay&#39;s Treaty-was signed on 19 November 1794 and sent to the Senate for ratification. While it resolved some problems left over from the conclusion of the American Revolution and granted limited access to trade with India, it said nothing about neutral rights or impressment. Trade with the British West Indies was placed under enough restrictions that the Senate rejected that article. When news of the contents of the treaty reached the American public, it provoked outrage and opposition by much of the press. Nevertheless, the Senate ultimately ratified the treaty by a two-thirds m ajority on 22 June 1795. Disagreements over the terms of the treaty contributed to an anti-administration stance and the emergence of an organized political opposition. Historians have generally agreed that, despite its shortcomings, the treaty was the best that could be expected given the position of the United States at that time. The French regarded the Jay Treaty as a further repudiation of the Franco-American treaty of 1778 that aggravated existing tensions between the two nations. In February 1796, the House appointed a committee to inquire and report on legislation for the relief of American seamen impressed into the service of a foreign power. Assigned to this committee was Edward Livingston of New York, who took his seat in the House on 4 March 1795 for the first session of the fourth Congress, and who soon became an important new figure in the struggles for justice for the American sailor. A lso on the committee were Benjamin Bourne of Rhode Island, John Swanwich of Pennsylvania, Samuel Smith of Maryland, and William L. Smith of South Carolina. William Smith, the congressional pioneer in the cause of healrhcare for sailors, was back in the fight for a short period. Livingston drafted a report, which was discussed and incorporated into a bill that was

Edward Livingston (1764-183 6) represented New York in Congress from 1795 to 1800. H e would later serve the nation as President Jackson&#39;s secretary ofstate. passed by the House. The Senate amended the bill, and the House accepted the changes. The m easure was signed imo law on 28 May. It provided for the appointment of two agents, one of whom wo uld reside in Great Britain and the other in the West Indies, whose duties involved investigating the situation of any American citize n who was impressed or detained by a foreign power. Every legal means was to be used to free a citizen so detained. Other provisions required the collectors of customs to grant certificates of citizenship to any sailor who produced proof of the same. In cases of impressment, the master of the ship from which the sailor was removed was to report the incident to the consul or the diplomatic minister at the first opportunity. President Washington sent Congress his last report on the state of the nation on 7 December 1796. In it he noted that it was too soon to fully ascertain the effect of the recently passed legislation for the protection and relief of American seamen, but he had reason to believe that it would be beneficial. He cited som e progress in freeing sailor prisoners elsewhere. H e added that, &quot;To secure res pect to a neutral fl ag requires a naval force, organized and ready to vindicate it from assault and aggression.&quot; Later in his report he shared recently re-

ceived correspondence on commerce: &quot;Our trade has suffered and is suffering extensive injuries in the West Indies, from the cruisers and agents of the French republic.&quot; On 20 December, the House appointed a committee to inquire into the effectiveness of the laws for the protection of American seamen and to offer any necessary amendments. Congressman Livingston was again appointed to head the committee. To prepare for the task, he reques ted and received information from Secretary of State Timothy Pickering, which he presented to his colleagues on 18 February 1797. His report provided statistics on the number of men impressed and also included information on the effectiveness of the earlier legislation requiring the masters of American ships to bring home without charge at least two sailors fo und in any po rt for every 100 tons of his vessel. In practice, masters would take them only if they needed more crew to man the ship. If they were fully manned, masters ty pically contrived to evade the law. According to the attorney general, there was no effective way to prosecute them. In the m any foreign ports where there was no American consul in residence, sailors in distress h ad no one to turn to for help. Instead , Pickering suggested that a tax on every vessel or on every seam an would provide an adequate fund to send home those stranded in foreign ports. On the m atter of consuls caring for sick seamen in foreign ports, an allowance of twelve cents a day was deemed inadequate. In E urope, that sum would buy only one meal a day. The existing law required cons uls to support seamen at their own expense, including the cost of physicians and nurses, and there was no provision for burying the dead. Pickering also sent information on the lack of respect by the British for the certificates carried by American seamen to protect them from impressment. In the past, British officers had respected Americans&#39; documentation of citizenship, but later they claimed that British citizens had either been given these certificates or h ad procured them surreptitiously. Pickering acknowled ged that it was &quot;highly probable&quot; that there were some abuses, but he understood that sometimes, for example, seamen lost their documents and consuls had to issue