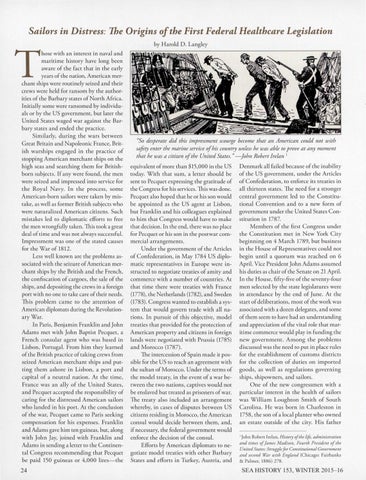 Sailors in Distress: 1be Origins of the First Federal Healthcare Legislation by H arold D . Langley

hose with an interes t in naval and ma ritime history h ave long been aware of the fact that in the early yea rs of the nation, American merch ant ships we re routinely seized and their crews were held for ransom by the autho rities of the Barbary states of No rth A fri ca . Initially som e were ra nsomed by individuals or by the US government, bu t later the U nited States waged war against the Barbary states and ended the practice. Sim ila rly, during the wa rs between G reat Britain and Napoleonic France, British wa rships engaged in the prac ti ce of stopping Am erican merchant ships on the high seas and searching them fo r Britishborn subj ects. If any were found, the men were seized a nd impressed into service fo r the Roya l Navy. In the p rocess, so me American-born sailors were taken by mista ke, as well as fo rmer British subj ects who were naturali zed A merican citizens. Such mistakes led to diplom atic efforts to free the men wrongfully taken . This took a great deal of time a nd was not always successful. Impressment was one of the stated causes for the War of 1812 . Less well kn own a re the pro blems associated with t he seizure of American merchant ships by the British and the French, t he confisca tion of cargoes, the sale of the ships, and depositing the crews in a fore ign port with no one to take care of their needs. This problem cam e to the attention of American diplomats during the Revolutionary W ar. In Pa ri s, Benj amin Franklin and John Adams met with John Baptist Pecquet, a French consular age nt who was based in Lisbon, Portugal. From him they learned of the British practice of taking crews fro m seized A merican m erchant ships and putting them ashore in Lisbon , a port a nd capital of a neutral n ation . At the time, France was a n ally of the United States, and Pecquet accepted the responsibility of carin g fo r the distressed Am erican sailors who landed in his port. A t the conclusio n of the wa r, Pecquet came to Paris seeking compensation fo r h is expenses . Franklin and Adams gave him ten guineas, but, along with John Jay, joined with Frank lin and Adam s in sending a letter to the Continental Congress recommending that Pecquet be paid 150 guineas o r 4, 000 !ires- the

&quot;So desperate did this impressment scourge become that an American could not with safety enter the marine service of his country unless he was able to prove at any moment that he was a citizen of the United States.&quot; - John Robert Irelan 1 equivalent of more tha n $ 15,000 in the US today. W ith that sum, a letter should be sent to Pecquet expressing the gratitude of the Congress for his services. This was done. Pecquet also hoped that he or his son would be appointed as the US agent at Lisbon, but Franklin and his colleagues explained to him that Congress wo uld have to m ake that decision. In the end, there was no place for Pecquet or his son in the pos twar commercial arrangements. U nder the government of the A rticles of Confederation, in M ay 1784 US diplom atic representatives in Europe were instructed to nego tiate treaties of amity a nd commerce w ith a number of countries . Ar that time there were treaties w ith France (1778), the Ne therlands (1782), and Sweden (1 783). Congress wanted to establi sh a system that would govern trade with all nations. In pursuit of this objecti ve, model treaties that provided for the pro tection of American prope rty and citizens in fo reign lands were negotiated with Prussia (1785) and Mo rocco (1787). The intercession of Spain m ade it possible fo r the US to reach an ag reement with the sultan of Morocco. Under the terms of the m odel treaty, in the event of a wa r between the two nations, cap tives wo uld not be enslaved but treated as prisoners of wa r. The treaty also included an a rra ngement whereby, in cases of disputes between US citizens residing in Morocco, the American consul wo uld decide between them, and, if necessa ry, the federal government wo uld enfo rce the decision of the con sul. Efforts by A merica n diplomats to negotiate model treaties w ith other Barba ry States and efforts in Turkey, Austri a, and

D enmark all fa iled because of the inability of the US government, under the Articles of Confederation, to en fo rce its treaties in all thirteen states. The need fo r a st ronger central government led to the Consti t utional Convention and to a new fo rm of government under th e U nited States Consti tutio n in 1787. Members of the fi rst Con gress under the Co nstitution m et in New York C ity beginning on 4 M arch 1789, but busi ness in the H ouse of Representatives could not begin until a quo rum was reached on 6 Ap ril. Vice President John Adams assumed his duties as chair of the Senate on 21 April. In the Ho use, fifty-five of the seventy-four m en selected by the state legislatures were in attendance by the end of June. At the start of deliberations, mos t of the work was associated with a dozen delegates, and some of them seem to have had an understanding and app reciation of the viral role that m aritime commerce would play in fundin g the new government. A m on g the pro blem s discussed was the need to put in place rules fo r the establishment of custom s districts fo r the collection of duties on imported goods, as well as reg ulations governing ships, shipowners, and sailors. O ne of the new co ngressm en w ith a particular interest in the health of sailors was W illiam Lo ugh ton Smith of Sout h Carolin a. He was bo rn in C harleston in 1758, the son of a local planter who owned an estate o utside of the city. His fa ther 1 John Robe re Irelan, History ofthelife, administration and times ofJames Madison, Fourth President of the United States: Struggle for Constitutional Government and second War with England (Ch icago: Fa irba n ks &amp; Pa lm er, 1886) 278 .