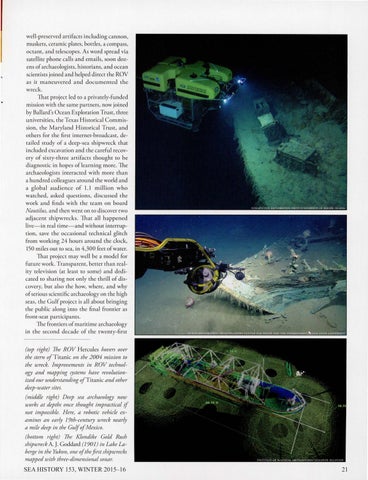 well-preserved artifacts including cannon , muskets, ceramic plates, bottles, a compass, octant, and telescopes. As wo rd spread via satellite phone calls and ema ils, soon dozens of archaeologists, historians, and ocean scientists joined and helped direct the ROY as it maneuvered and docum ented the w reck. That project led to a privately-funded mission with the same partners, now joined by Ballard&#39;s Ocean Exploration Trust, three universities, the Texas Historical Commission, the Maryland Historical Trust, and others for the first internet-broadcast, detailed study of a deep-sea shipwreck that included excavation and the careful recovery of sixty-three artifacts thought to be diagnostic in hopes of learning m ore. The archaeologists interacted w ith more than a hundred colleagues around the world and a global audience of 1.1 million who watched, asked question s, discussed the wo rk and finds with the team on board Nautilus, and then went on to discover two adj acent shipwrecks. That all h appened live-i n rea l time-and without interruption, save the occasional technical glitch from wo rking 24 hours aro und the clock, 150 miles our to sea, in 4,300 feet of water. Thar project may well be a model for future work. Transparent, better than reality television (at least to som e) and dedicated to sha ring not o nly the thri ll of discovery, but also the how, where, and why of serious scientific archaeology on the high seas, the G ulf project is all about bringing the public along into the final frontier as front-seat participants. The front iers of maritime archaeology in the second decade of the twenty-firsr

(top right) lhe ROV H ercules hovers over the stern of Titanic on the 2004 mission to the wreck. Improvements in ROV technology and mapping systems have revolutionized our understanding ofTitanic and other deep-water sites. (middle right) Deep sea archaeology now works at depths once thought impractical if not impossible. Here, a robotic vehicle examines an early 19th-century wreck nearly a mile deep in the Gulf ofMexico. (bottom right) lhe Klondike Gold Rush shipwreck A. ] . Goddard (1901) in Lake Laberge in the Yukon, one ofthe first shipwrecks mapped with three-dimensional sonar.