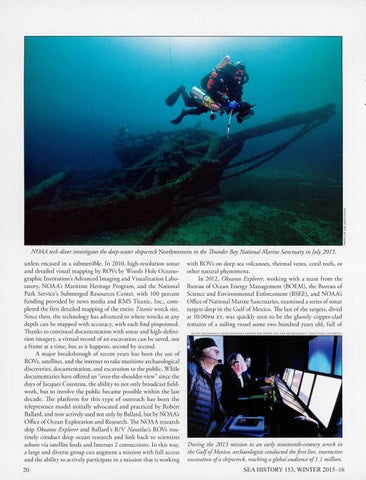 unless encased in a submersible. In 2010, high-resolution sonar and detailed visual m apping by ROVs by Woods H ole Oceanographic Institution&#39;s Advanced Imaging and Visualization Laboratory, N OAA&#39;s M aritime H eritage Progra m, and the National Park Service&#39;s Submerged Resources Center, with 100 percent fundin g provided by news media and RMS T itanic, Inc., completed the fi rst detailed mapping of the entire Titanic wreck site. Since then, the technology has advanced to where wrecks at any depth can be mapped with accuracy, with each find pinpointed. Thanks to continual documentation with sonar and high-definition imagery, a virtual record of an excavation can be saved, not a frame at a time, but as it happens, second by second. A major breakthrough of recent yea rs has been the use of ROVs, satellites, and the internet to take maritime archaeological discoveries, documentation, and excavation to the public. W hile documentaries have offered an &quot;over-the-shoulder-view&quot; since the days of Jacques Cousteau, the ability to not only broadcast fieldwork, but to involve the public became possible within the las t decade. The platfo rm for this type of outreach has been the telepresence model initially advocated and practiced by Robert Ballard, and now actively used not only by Ballard, but by NOAA&#39;s Office of O cean Exploration and Research . The NOAA research ship Okeanos Explorer and Ballard&#39;s R /V Nautilus&#39;s ROVs ro utinely conduct deep ocean research and link back to scientists ashore via satellite feeds and Internet 2 connections. In this way, a large and diverse group can augment a mission with full access and the ability to actively participate in a mission that is working 20

with ROVs on deep sea volcanoes, thermal vents, coral reefs, or other natu ral phenomena. In 201 2, Okeanos Explorer, working with a team from the Bureau of Ocean Energy M anagement (BOEM), the Bureau of Science and Environmental Enfo rcement (BSEE), and N OAA&#39;s O ffice of National M arine Sanctuaries, examined a series of so nar targe ts deep in the G ulf of M exico. The las t of the targets, dived at 10:00PM ET, was quickly seen to be the ghostly copper-clad remains of a sailing vessel some two hundred years old, full of

During the 2 013 mission to an early nineteenth-century wreck in the GulfofM exico, archaeologists conducted the first live, interactive excavation ofa shipwreck, reaching a global audience of 1.1 million.