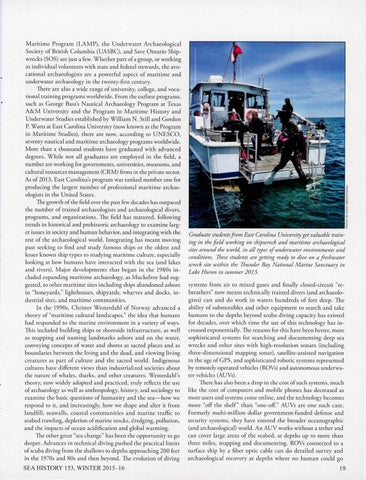 Maritime Program (LAMP), the Underwater Arch aeological Society of British Columbia (UASBC), and Save Ontario Shipwrecks (SOS) are just a few. W hether part of a gro up, or wo rking as individual volunteers with state and federal stewards, the avocational arch aeologists are a powerful aspect of maritime and underwater archaeology in the twenty-first century. There are also a wide range of university, college, and vocational training programs worldwide. From the earliest programs, such as George Bass&#39;s Nautical Archaeology Prog ram at Texas A&amp;M U niversity and the Program in Maritime History and U nderwater Studies established by W illiam N. Still and Gordon P. Wans at East Carolina University (now known as the Program in Maritime Studies), there are now, according to UNESCO, seventy nautical and maritime archaeology programs wo rldwide. More than a thousand students have graduated wi th advanced degrees. While not all graduates are employed in the field, a number are working for governments, universities, museums, and cultural resources management (CRM) firms in the private sector. As of2013, East Carolina&#39;s program was ranked number one for producing the largest number of professional maritime archaeologists in the United States. The growth of the field over the past few decades has outpaced the number of trained archaeologists and archaeological divers, programs, and organizations. The field has matured, following trends in historical and prehistoric archaeology to examine larger issues in society and human behavior, and integrating with the rest of the archaeological wo rld. Integrating has meant moving past seeking to find and study famous ships or the oldest and lesser known ship types to studying maritime culture, especially looking at how humans have interacted with the sea (and lakes and rivers). Major developments that began in the 1980s included expanding maritime archaeology, as Muckelroy had suggested, to other maritime sites including ships abandoned ashore in &quot;boneyards,&quot; lighthouses, shipyards, wharves and docks, industrial sites, and maritime communities. In the 1990s, Christer Westerdahl of Norway adva nced a theory of &quot;maritime cultural landscapes,&quot; the idea that humans h ad responded to the marine environment in a variety of ways. This included building ships or shoreside infrastructure, as wel l as mapping and naming landmarks ashore and on the water, conveying concepts of water and shores as sacred places and as bou ndaries between the living and the dead, and viewing living creatures as part of culture and the sacred world. Indigenous cultures have different views than industrialized societies about the nature of whales, sh arks, and other creatures. Westerdahl&#39;s theory, now widely adopted and practiced , truly reflects the use of archaeology as well as anthropology, history, and sociology to examine the basic questions of humanity and the sea-how we respond to it, and increasingly, how we shape and alter it from landfi ll, seawalls, coastal communities and marine traffic to seabed trawling, depletion of marine stocks, dredging, pollution, and the impacts of ocean acidification and global warming. The other great &quot;sea change&quot; has been the opportunity to go deeper. Advances in technical diving pushed the practical limits of scuba diving from the shallows to depths approaching 200 feet in rhe 1970s and 80s and then beyond. The evolution of diving

Graduate students from East Carolina University get valuable training in the field working on shipwreck and maritime archaeological sites around the world, in aLL types of underwater environments and conditions. These students are getting ready to dive on a freshwater wreck site within the Thunder Bay National Marine Sanctuary in Lake Huron in summer 2013.

systems from air to mixed gases and finally closed-circuit &quot;rebreathers&quot; now means technically trained divers (and archaeologists) can and do work in waters hundreds of feet deep. The ability of submersibles and other equipment to search and take humans to the depths beyond scuba diving capacity has existed for decades, over which time the use of this technology has increased exponentially. The reasons for this have been better, more sophisticated systems for search ing and documenting deep sea wrecks and other sires with high-resolution sonars (including three-dimensional mapping sonar), satellite-assisted navigation in the age of GPS, and sophisticated robotic systems represented by remotely operated veh icles (ROVs) and autonomous underwater vehicles (AUVs) . There has also been a drop in the cost of such systems, much like the cost of computers and mobile phones h as decreased as more users and systems come online, and rhe technology becomes more &quot;off the shelf&quot; than &quot;one-off.&quot; AUVs are one such case. Formerly multi-million dollar government-funded defense and security systems, they have entered the broader oceanographic (and archaeological) world. An AUV works without a tether and can cover large areas of the seabed, at depths up to more than three miles, mapping and documenting. ROVs connected to a surface ship by a fiber optic cable can do detailed survey and archaeological recovery at depths where no human could go