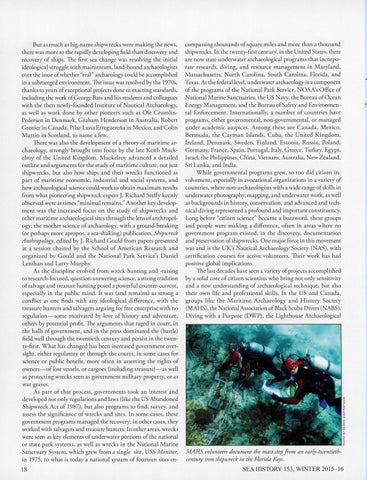 But as much as big-name shipwrecks were making the news, there was more to the rapidly developing field than discovery and recovery of ships. The first sea change was resolving the initial ideological struggle with mainstream, land-bound archaeologists over the issue of whether &quot;real&quot; archaeology could be accomplished in a submerged environment. The issue was resolved by the 1970s, thanks to years of exceptional projects done to exacting standards, including the work of George Bass and his students and colleagues with the then newly-founded Institute of Nautical Archaeology, as well as work done by other pioneers such as Ole CrumlinPedersen in Denmark, Graham Henderson in Australia, Robert Grenier in Canada, Pilar Luna Erreguerefta in Mexico, and Colin Martin in Scotland, to name a few. There was also the development of a theory of maritime archaeology, strongly brought into focus by the late Keith Muckelroy of the United Kingdom. Muckelroy advanced a detailed outline and arguments for the study of maritime culture, not just shipwrecks, but also how ships and their wrecks functioned as part of maritime economic, industrial and social systems, and how archaeological science could work to obtain maximum results from what pioneering shipwreck expert]. Richard Steffy keenly observed were at times &quot;minimal remains.&quot; Another key development was the increased focus on the study of shipwrecks and other maritime archaeological sites through the lens of anthropology, the mother science of archaeology, with a ground-breaking (or perhaps more apropos, a sea-shaking) publication, Shipwreck Anthropology, edited by J. Richard Gould from papers presented at a session chaired by the School of American Research and organized by Gould and the National Park Service&#39;s Daniel Lenihan and Larry Murphy. As the discipline evolved from wreck hunting and -raising to research-focused, question-answering science, a strong tradition of salvage and treasure hunting posed a powerful counter-current, especially in the public mind. It was (and remains) as strong a conflict as one finds with any ideological difference, with the treasure hunters and salvagers arguing for free enterprise with no regulation-some motivated by love of history and adventure, others by potential profit. The arguments that raged in court, in the halls of government, and in the press dominated the (battle) field well through the twentieth century and persist in the twenty-first. What has changed has been increased government oversight, either regulatory or through the courts, in some cases for science or public benefit, more often in asserting the rights of owners-of lost vessels, or cargoes (including treasure)-as well as protecting wrecks seen as government military property, or as war graves. As part of that process, governments took an interest and developed not only regulations and laws (like the US Abandoned Shipwreck Act of 1987), but also programs to find, survey, and assess the significance of wrecks and sites. In some cases, these government programs managed the recovery; in other cases, they worked with salvagers and treasure hunters. In other areas, wrecks were seen as key elements of underwater portions of the national or state park systems, as well as wrecks in the National Marine Sanctuary System, which grew from a single site, USS Monitor, in 1975, to what is today a national system of fourteen sites en18

compassing thousands of square miles and more than a thousand shipwrecks. In the twenty-first century, in the United States, there are now state underwater archaeological programs that incorporate research, diving, and resource management in Maryland, Massachusetts, North Carolina, South Carolina, Florida, and Texas. At the federal level, underwater archaeology is a component of the programs of the National Park Service, NOAA&#39;s Office of National Marine Sanctuaries, the US Navy, the Bureau of Ocean Energy Management, and the Bureau of Safety and Environmental Enforcement. Internationally, a number of countries have programs, either governmental, non-governmental, or managed under academic auspices. Among these are Canada, Mexico, Bermuda, the Cayman Islands, Cuba, the United Kingdom, Ireland, Denmark, Sweden, Finland, Estonia, Russia, Poland, Germany, France, Spain, Portugal, Italy, Greece, Turkey, Egypt, Israel, the Philippines, China, Vietnam, Australia, New Zealand, Sri Lanka, and India. While governmental programs grew, so too did citizen involvement, especially in avocational organizations in a variety of countries, where non-archaeologists with a wide range of skills in underwater photography, mapping, and underwater work, as well as backgrounds in history, conservation, and advanced and technical diving represented a profound and important constituency. Long before &quot;citizen science&quot; became a buzzword, these groups and people were making a difference, often in areas where no government program existed, in the discovery, documentation and preservation of shipwrecks. One major force in this movement was and is the UK&#39;s Nautical ArchaeolGgy Society (NAS), with certification courses for active volunteers. Their work has had positive global implications. The last decades have seen a variety of projects accomplished by a solid core of citizen scientists who bring not only sensitivity and a new understanding of archaeological technique, but also their own life and professional skills. In the US and Canada, groups like the Maritime Archaeology and History Society (MAHS), the National Association ofBlack Scuba Divers (NABS), Diving with a Purpose (DWP), the Lighthouse Archaeological

MAHS volunteers document the mast step from an early-twentiethcentury iron shipwreck in the Florida Keys.