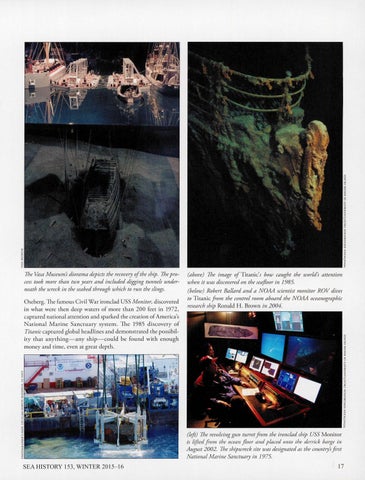 The Vtisa Museum's diorama depicts the recovery ofthe ship. The process took more than two years and included digging tunnels underneath the wreck in the seabed through which to run the slings. Oseberg. The famous Civil War ironclad USS Monitor, discovered in what were then deep waters of more than 200 feet in 1972, captured national attention and sparked the creation of America's National Marine Sanctuary system . The 1985 discovery of Titanic captured global headlines and demonstrated the possibility that anything-any ship-could be found with enough money and time, even at great depth .

(above) The image of Titanic's bow caught the world's attention when it was discovered on the seafloor in 15)85. (below) Robert Ballard and a NOAA scientist monitor ROV dives to Titanic from the control room aboard the NOAA oceanographic research ship Ronald H . Brown in 2004.

(left) The revolving gun turret from the ironclad ship USS Monitor is lifted from the ocean flour and placed onto the derrick barge in August 2002. The shipwreck site was designated as the country's first National Marine Sanctuary in 1375.